only Marian shrine of Piacenza 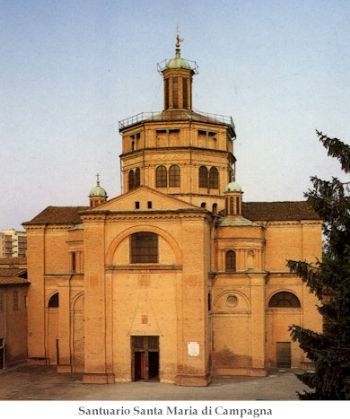 The church, one of the most compelling documents of the sixteenth century Italian, and the only shrine in the city. Located in an area that the local tradition believes already occupied by a small chapel dedicated to the cult of St. Mary Country (XI century) and near which Pope Urban II had convened in 1095 the Council for the decisive implemented the first crusade .
The temple was rebuilt between 1522 and 28 on the project's Alessio Tramello Piacenza (1470-1528), the promoter of the spread of language Bramante in Emilia Romagna, and author of the Church of the Holy Sepulchre and the Monastery of the Annunciation of Lodi.
Tramello, admirably combining the styles of Bramante in a learned decorative rhythm full of color values, creates structures within verticaleggianti, a body of a Greek cross with four corner chapels at the landing of arms, signed by a dome supported by a drum octagon two orders .

In 1547 Pier Luigi Farnese, who had always loved the church, entrusted to the Franciscans as compensation for the loss of their convent of St. Mary of Nazareth, demolished to make room for the new city walls. In 1791 it was decided, on a design by Lothar Tomb, to expand the area of the presbytery by lengthening the arm of the west and thus transforming the original Greek cross plan, in Latin overturned.
With Napoleon Franciscans are removed and the adjacent convent, built in 1584 on the ruins of the ancient church of St. Victoria, will be confiscated by the Italian State (1866) and intended to become psychiatric hospital.
L 'interior is dominated by the central dome supported by strong pillars that define the space occupied by the four side arms, covered by a barrel voltatura frescoed coffered from GB Ercole II in the mid-eighteenth century. The clear and rational architectural volumes are the backdrop to the bombastic paintings by Giovanni Antonio Sacchi said Pordenone (1484 c.-1539), the famous artist who in the wake of the teachings of Titian, was able to develop a personal language and unconventional, rebellious emphatically to compose classic.

The reading of the paintings of the church thus takes into account first of all, a path dedicated to him, which starts from the frescoes in the dome and reaches the chapels of St. Catherine and the Magi, located to the left of the vault, where the arms of the church. The presence of Pordenone in S. Maria di Campagna occurred in two distinct phases.
The first, 1530-32, during which the Pordenone, already famous for his business in the pictorial Cremona Cathedral, painted the lantern, the eight sides of the dome, the friezes of the ribs, the frieze above the loggias with mythological themes and, apparently, even the chapel of St. Catherine.
The second phase (1535 c.} Him busy in the Chapel of the Magi and neglect instead the conclusion of the decoration of the dome then brought to an end in 1543 by bunting Bernardino Gatti said Soiaro (1495-1574}, which will be able to show his academic Michelangelism not separated from ways Correggio, on part of the plumes and along the drum. the solutions adopted by Sacchi for the dome, already built into wedges and then precluding solutions proto-baroque Correggio in Parma, are of considerable importance in relation to the development of illusionistic decoration of the sixteenth century.
For here the author, implementing a wonderful blend of proposals Venetian and Tuscan-Roman, produces the total involvement of the viewer, implemented through the great figures gesticulating in wondrous glimpse that seems to invade the real space, theatrically incurred by a careful game of looks and gestures.
In the dome the pin of the speech is represented by the figure of God, placed in the lantern, which descends steeply, held back by three angels.
In the cloves are instead space Prophets and Sibille, divided by pilasters with the depiction of biblical stories (Man, Noah's Ark, Sacrifice of Isaac, Joseph sold by his brothers, Moses receiving the tablets of the law, David and Goliath, Judith and Holofernes) alluding to the contrast between the pagan and Christian.
Along the frieze separating the dome from the drum, there is instead the representation of episodes relating to false and lying gods (Rape of Europa, Drunken Silenus, Sacco, Hercules, Jupiter, Diana, Venus and Adonis, Neptune and Amphitryon), data cursive immediacy and interspersed with medallions bearing events of heroism made by humanity ante gratiam.
In the lower register, the pilasters between the mullioned windows, are then the figures of the Apostles, made by Bernardino Gatti, who also designed the Stories of Mary played on the drum. The cycle of paintings celebrating so the epic of humanity redeemed through the saving sacrifice of Christ, according to the indications Augustinian. The 'work of St. Augustine is among other things clearly expressed in the incipit volume visible in the fresco executed by the same Pordenone to the left of the church, where the saint is depicted monaco inside a temple barrel vault , whose entablature side illusionistically extends toward the viewer.
A compositional rhythm more pausato characterizes the actions of Pordenone in the chapel corner near the sanctuary dedicated to St. Catherine and adorned with the stories of the saint.
The story starts off with the Mystical Marriage of St. Catherine, the altarpiece, to continue in the lower area of the left wall with the Dispute of the saint with the philosophers and close in the lunettes above it with the sprocket and the Martyrdom Beheading. In the octagonal dome instead are visible figures of the Apostles interspersed with ovals Stories of Passion, personifications between angelic and Virtue.
Along the wall of the drum are located Underlying the holy Dorotea, Agata, Elena, Barbara, Mary Magdalene. The decoration of the dome ends with Saints John the Baptist, Julian Francis, leaving the oculi plumes, while putti, musical instruments and fantastic animals complete columns and soffits.
Within this tight schedule the brush of Pordenone achieves high quality levels.

For example in the Dispute with the philosophers of the artist creates a more complex stage machinery of the time, focused on the double movement driven by the outstretched arms of Catherine and the threatening gesture of the persecutor (the emperor Maximian) that leans to the right from the balcony between disorientation of the philosophers in the foreground. Still, do impetuous of Friuli is also fascinating translation in the lunette with the Martyrdom the sprocket, the whirling motion that emanates from the wheel, shattered by divine intervention.
Always at Pordenone belong paintings of opposite Chapel of the Magi also called the Virgin. It was commissioned by the patrician Piacenza Pietro Antonio Rollieri around 1535, points out as his coat of arms on the pilaster to the right of the Adoration of the Magi. The dome is dominated by the Assumption of Mary and figures of angels musicians; at the center of the pilasters that space out bins, stand monochrome medallions with some pagan gods (Saturn, Vulcan, Perseus, Apollo, Daphne, Diana, Asclepius, Minerva, Venus Celeste); drum bears instead Saints Francis, Peter Martyr, Clare, Peter, Sebastiano alternating with Cecilia, John the Baptist, Veronica, Michael, the Guardian Angel, Agnes, Jerome, while plumes are placed in the four Prophets.

On the walls instead the altarpiece dedicated to the Adoration of the Magi is characterized by the presence of some lively characters that protrude from the balconies of the building right. The Pordenone also painted on the left wall the Nativity of Mary, distinguished by a shrewd realism and the giant silhouettes of attendants placed in the foreground, and in the lunettes above the nativity and the flight into Egypt, the first perhaps attributable to a student.
In addition to the interventions of Pordenone, the church contains other interesting works of art. Returning to the entrance of the chapel to the right corner dedicated to the holy Anatolia and Victoria, was decorated between 1576 and 79 by Ferrante Moreschi (1533-84), painter and plasterer Piacenza raised in Rome in the environment by Daniele da Volterra. In the lantern once you notice a boy coming down from heaven, holding a wreath in haste; the time is then divided into eight segments, cadenced by ribs that rest on a frame straight eight telamons naked, bearing pairs of putti and prophets alternating sibyls.

The frescoes are also embellished with grotesque motifs and candelabra. The style of Roman painting, plastic and noble, much sought after by the culture piacentina of those years, I fully coglibili lunettes depicting the stories of the two holy holders, unfortunately not entirely legible, with the episodes of the killing of the dragon by S. Vittoria and the complaint made by the husband of the holy victory after they voted to Christianity, in fact forms that echo Michelangelo.
The altarpiece representing St. Louis surrounded by saints, made in 1841 by Paolo Bozzini, was placed here after the restoration that affected the dome in 1970. Continuing you are in the right arm of the church. Altar is visible a polychrome wooden group, operates 1757 by Jan H. Geernaert. The left wall is home rather the depiction of the Annunciation (1724) by Ignaz Stern.
In the next chapel, dedicated to St. Anthony and painted with the usual strong emphasis scenic brothers Ferdinand and Francis Bibbiena, we note the canvas by Camillo Procaccini (1551-c. 1629) with St. Francis receiving the stigmata. Thus reached the presbytery, modernized in 1791 with the demolition of the former, you can admire the marble altar with silhouettes neoclassical, which houses a wooden sculpture in the newsstand (XIV century) representing Mary and the Child.
Beyond you notice the choir, carved by Giulio Rossi in 1560, and at the center of the wall, a painting of St. Catherine attributed to Giulio Cesare Procaccini. The corners of the lunette above bear instead of two paintings Cremonese Camillo Boccaccino with Madonna and the Angel of the Annunciation (1529), internal doors already a lost organ here inserted at the end of the eighteenth century, with obvious desunzioni Titian in warm and enveloping chromaticism connoting the scene. The two paintings above the side doors, representatives Samson and Delilah and Jael and Sisera, were instead made by Benedict Marini in 1625.

Surpassed the chapel of St. Catherine, we highlight some paintings by Camillo Procaccini that flank the altar of the back wall of the transept, where he placed a work by Gaspare Traversi with St. Francis in Ecstasy. The Soiaro performed instead in 1543 the fresco of St. George slaying the dragon place on the wall immediately to the left of the entrance.
All around the temple runs a frieze consisting of painted canvas, performed by different artists (D. Crespi, A. Tiarini, Guercino, etc.).
Worthy of note, finally, are the statue of Ranuccio Farnese, facing the altar, assigned by local tradition to Mochi, and some paintings by Antonio Campi and Gaspare Landi kept in the sacristy.
© infotour p. iva 01474490339