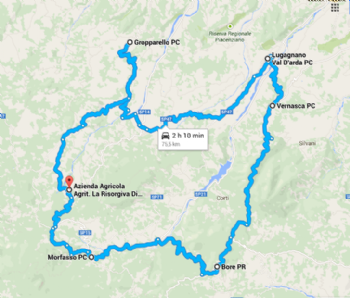 This route is along in the car, but there will be a walk to visit parks and castles, beginning Morfasso.
Morfasso is located in the Val d'Arda
Part of the territory is part of the Provincial Park Mount Moria, safeguard wildlife area covered by a dense forest that preserves ancient oaks.
The park, which became famous after being the set of filming the show The Black Arrow, is the destination, in the day of August, for a traditional country festival that sees gather in large clearing thousands of Piacenza.
It is located in the municipality of Santa Franca sanctuary, located at a high hill in the midst of meadows, a destination for Sunday outings for Piacenza and not.
The population of Sperongia, which is 5 km from Morfasso, you can visit the Museum of the Resistance Piacenza opened on 25 April 2009.
The museum is dedicated to the partisan Piacentino, but also to the people who suffered during 20 long months under the heel nazifascist, paying a heavy toll of death, destruction, violence and deportation in the hope of freedom and a better future.
Along the main road we come across in the small village of
Bore, a small town appreciated as a quiet resort, but for the moderation of the climate in the summer.
A few kilometers the small town of Vernasca which preserves the remains of the Romanesque church of St. Columban (XII century), which is the bell tower and the apse, currently in the exquisite setting of a square - garden in the upper part of the country; the rest of the temple was torn down at the beginning of the twentieth century, when it had already been made unsafe by a landslide.
The new church was built in 1890, lower than the ancient church.
Lugagnano Val d'Arda is situated along the Arda river, on the northern slopes of the Apennines of Piacenza.
The landscape is characterized by clay of Monte Giogo.
In one of the villages, Velleia Romana, in 1747 was found the tabula Alimentary Trajan, the largest enrollment of bronze throughout the Roman Empire.
From then on, thanks to Philip, Duke of Parma, the excavations brought to light one of the most interesting Roman municipalities.
It represented one of the first major commercial interchange points, but also a holiday resort for consuls and proconsuls thanks to the spas found in the city.
The finds are kept in the National Museum of Parma, while only a small part of some are in the museum Velleia.
Finally Gropparello whose history is closely linked to that of the castle, which is located at the beginning of the country.
Was the site of a Roman fort that garrisoned the way to Velleia. Donated by Charlemagne to the bishop of Piacenza in the ninth century suffered attacks and sieges during the struggles between Guelphs and Ghibellines.
In the town you can find many fossils along the banks of streams Vezzeno Chero and Riglio.
The castle, in fact, stands atop a rocky outcrop, on a cliff overlooking the creek Vezzeno forming a ravine about 85 meters high, making the castle, in the past known as the fortress of Cagnano, virtually impregnable over the centuries.
In the park surrounding the castle was opened the first park emotional Italian, where, accompanied by animators, children can go to the discovery of Nordic myths and fairy tales.
© infotour p. iva 01474490339