Discovering the Road of the Mills

from the Farm Villa Paradiso between medium and high val Tidone 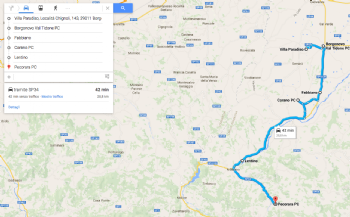 A path of strong meaning, which combines the ancient traditions, the environment and good food.
The Route of the Mills is one of the most scenic routes in the province of Piacenza, was only for what the mills are in these parts.
They are buildings that speak of a long story, made of work and sacrifice, of rules and food, growth and development; much of what today we can see and appreciate this beautiful stretch of the Val Tidone, and not only passes through the grinding wheels and tools that are still well preserved within these mills. The Association of Mills Road contains about twenty members, including mills, farms, wineries and traditional craft products. The intent is to recover the more than thirty mills scattered throughout the territory, in order to restore, if only for demonstration and teaching, their functionality, representing them as accommodation and hospitality, or cultural interest, such as the mill Loupe, today Museum of Milling, which exhibits a series of objects, documents and tools, the result of research and studies.
The Route of the Mills presents a path that affects part of the territory of the middle and upper Val Tidone, including the towns of Pianello, Nibbiano, Caminata and Pecorara.
Before reaching Pianello, you visit the Corano, a small village in the municipality of Borgonovo, with beautiful rural dwellings and an ancient castle rebuilt in 1453.
After a few kilometers we reach then Fabbiano, where already we find the first mills and the Vai Citizen in loc. Vai.
Further down the road, after a few hundred meters, on the left, the Santa Margherita; later we meet the other three: the Mulino Spada, the Piano and the Rosso.
Just as the latter begins a hiking trail, walk through the village of Pianello, leads up to Pecorara past Nibbiano, meeting in succession mills Nuovo, Rizzo, Ceppetto, Gobbo, Lentino, Molinazzo, Baldante, Reguzzi, Tombino, Albertini, Fracassi and, a little further on, Molinello.
It is part of the Farm Villa Paradiso after traveling.
© infotour p. iva 01474490339