An excursion to a charming and magical

from the farm La Madre Pietra to the mystic mountain: La Pietra Parcellaria 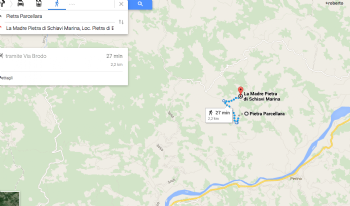 About two kilometers from the farm La Madre Pietra we can reach on foot in about half an hour one of the most beautiful places of the province, the crest of the massive la Pietra Parcellara.
Along the path suddenly appear the two peaks, like rocks emerged from the sea and are on the one hand, the crest of the massive la Pietra Parcellara overlooking the valley; on the other, the spike Pietra Perduca , on which is perched a medieval church; all around, the soft decline of Piacenza hills of Trebbia. "
A scenario fascinating, millennia considered a magical place.
La Pietra Parcellara is a mountain that though not particularly high, about eight hundred meters, overlooking the surrounding hills.
But the atmosphere is even more intriguing on Pietra Perduca, a seemingly impregnable tower.
But you only leave the paved road and venture out for a few minutes walk down a path to get there without too much effort on its slopes.
From here, a staircase leads up to the church built in the tenth century and the so-called "beds of the saints," two large square sinks carved in ancient times, perhaps during the Age of Bronzo.
I two basins are home to a rare species of amphibians, a colony of crested newts, which need water to live pure and clear.
A special feature of these tanks is that, as told by the locals, the water does not evaporate never, even in the hottest summers ever and does not freeze, a sign that perhaps they are fed by a hidden spring at a constant temperature.
One last question, in the church of St Anne houses a relic, a boulder on which it is said will show the imprint of the Madonna.
© infotour p. iva 01474490339