Route of about 2 hours between Val Nure and Val d'Arda

from the farm La Favorita 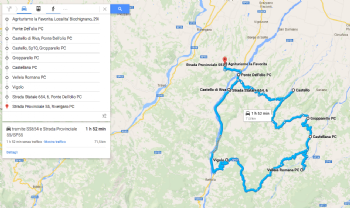 Here we propose a couple of solutions, a journey of about an hour to walk, a second path instead motorized, always starting from the farm La Favorita.
The first covers a distance of about 4 km and a half and goes towards Castelvecchio, with a brief stop in the quiet of a purely rural environment.
You return for a few hundred meters and turn left at the junction. Go past a farmhouse and go for a little way along the main road 55 to return the Farm La Favorita.

The second route leads from the farm La Favorita to follow a long loop around 70 km to go clockwise leading to visit the castle of Gropparello where do absolutely stop to discover the charm and grandeur of this historic manor.
Then continue towards Gropparello where to stop for a drink in a bar in the square before continuing towards Castellana which tells an ancient legend, as "children's book" which speaks of a rock called "Piplòn", which is along and the way that stands out from the ground ramrod straight into the sky, that racchiuderebbe inside the devil "Piplòn", in love with the beautiful Gesandra. The devil, disguised as a knight, came to Brother Gesualdo to intercede at the girl, but Gesualdo, aware of disguise, asked him a week to reflect; meanwhile he carved his own image in a nearby rock, and when at the end of the seven days, the devil appeared again, told him that Gesandra would marry him if he had been standing motionless in that place for seven years, seven months and seven days. The Devil agreed to the proposal.
With the passage of time "Piplòn" began to become covered with dust, but could not move because fleetingly saw behind him the face of Gesualdo who watched him constantly, without realizing that it was a graven image. Years passed and the dust that covered it became stone, imprisoning the naive hell forever.
After the town of Castellana and exceeded even stunning left petrified by the sight of this hell, you turn left and a short detour, you can visit the excavations of Veleia Romana, located on the opposite side of the valley, to a stage that deserves visit and a good rest.
You fall for a few km to deflect in the direction Vigolo Marchese, a small rural village that is an intermediate destination before reaching the castle of Riva, along the highway 654 in Val Nure.
Step outside to visit this manor built with the stones and the stones of the Trebbia and return through Pontedell'Olio, at Farmhouse La Favorita.
© infotour p. iva 01474490339