From the farm Podere Illica in Castell'Arquato 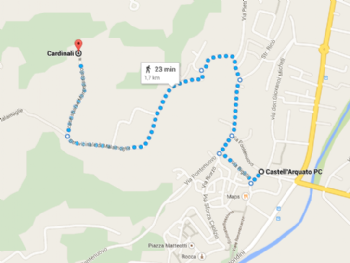 Castell'Arquato is a beautiful medieval town and cities. Strategically located on the foothills of the Val D'Arda, medieval village and 'perched on the hill, and dominates the passage.
The old town is built on the left bank of the river Arda.
The village is built according to the structure of the medieval villages and has undergone notable changes.
A village in which culture, history, natural riches and food come together in a perfect harmony.
Numerous events taking place in the country and in neighboring areas are a must-see attraction.
There are many beauties in Castell'Arquato.
From the monumental square, unique, the neighborhoods.
A walk in the village of Castell'Arquato will allow you to see different and beautiful monuments.
Starting from the low country, starting with the visit from the Avenue of Remembrance, you will find the imposing Torrione Farnese.
Next to it stands the Palazzo del Duca with the homonymous fountain.
Continuing the climb and taking the street called "Solata" appears majestic Visconti Fortress.
In front of the Rocca gaze is enchanted by the Monumental Square in which are represented the three powers of the Middle Ages: the religious power (Collegiate), military power (the Rock), political power (the Palazzo del Podesta). These are some of the monuments that you can visit in Castell'Arquato: every corner of the country is a discovery and magic.
© infotour p. iva 01474490339