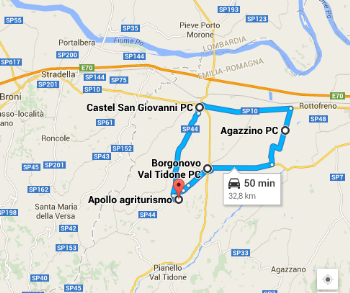 From L'Agriturismo Apollo visit that you should start with the reach the town of Borgonovo Val Tidone.
Founded in 1196 by the city of Piacenza at Casarnerio why defend the territory of Piacenza from invazioni enemy, the oppidum of Borgonovo was fortified by walls, Pit, castle and towers.
Borgonovo had the form of a rectangle, tracing the parallel streets and cross at right angles, in a very orderly urban plan.
The endowed with two doors, one to the south and the other north.
Around the walls dug a deep pit in time of war seems to have been filled with water.
After just three years was set on fire by the militias of Pavia.
Rebuilt by the consuls Piacenza, began north building a powerful castle defense: the Rock.
In fact, just arrived in Borgonovo Val Tidone, as if to welcome the stranger, stands the imposing fortress located in a strategic position to be immediately appreciated.
In the village you can admire the Collegiate, Palazzo Tedeschi, the Church of the Immaculate Conception, Villa Calciati and the adjoining oratory of San Rocco and the Convent with the Church of San Bernardino.
For those who would then make a leap into the past, it is recommended to visit the villages of Firethorn, Bilegno, Breno, Bruso, Castelnuovo, Quran, Fabbiano and Mottaziana, places where you can find a warm old times, as well as discover interesting artwork.
Firethorn example is the split in his small, well-preserved, the world's not long ago with its traditions, customs and habits.
Borgata border divided as it is between the towns of Sarmato and Borgonovo, united by the only parish with the beautiful church whose origins date back to 1575 notes.
Patron of the country is Sant'Agata together with San Mauro, but the patronal feast is celebrated precisely on the first Sunday of September with the feast of the "Madonna of the belt."
In this route that we propose can not miss a visit to Castel San Giovanni called the "Gateway to the Val Tidone" for its strategic position at the beginning of the homonymous valley, tourists very interesting for extensive series of fortresses and castles that dot .
The city also adheres to the 'National Association of the "City of Wine", located in an area particularly rich in settlements wine.
Two large weekly markets on Thursdays and Sundays do flow into the city a large number of visitors and buyers, in particular from near Oltrepn and the province of Milan.
Monuments of great historical and artistic value adorn the city: the Collegiate Church of St. John the Baptist of the thirteenth century, named national monument for the series of priceless works of art that it houses and Villa Braghieri Albesani-eighteenth century, already home of the Marquis Scotti Castel Bosco and currently houses the Municipal Library, the Historical and Ethnographic Museum of the Val Tidone.
When back, relax worth visiting the surroundings of the farm, the valley leading to the creek Crown and vineyards, and after a short walk through the vineyards to reach a small lake not too far to rest and contemplate the landscape.
© infotour p. iva 01474490339