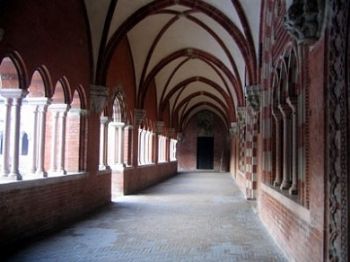 Medieval documents mention him as "Senum" and has military origins having come to see the border between Parma and Piacenza.
The present castle was founded in the late twelfth century by Siclero Landi and Savino Vicedomino, but not had time to finish the walls in 1188 troops of the municipalities of Pavia and Modena it razed.
Immediately, however, was rebuilt. In the following years, the village, dominated several families including Pallavicino, Landi, the Fogliani and others until he came here as the domination of the Farnese.
In the territory of Alseno stands the Abbey of Clairvaux of the Dove, in the homonymous village and founded by St. Bernard, come specially from France to deal with both of Clairvaux Milanese both of Clairvaux Piacentino.

The construction of the monastery began in the mid-twelfth century with the support of the most powerful families in the area and thanks to the intervention of the Bishop of Piacenza Arduino. Because of its importance the monastery came to be involved in often painful events such as in 1214 when it was plundered by troops from Cremona, the Parma and Reggio Emilia and burned and looted by the militia of Frederick II in 1335.
In the Renaissance begins the decline, in 1444 the monastery was erected in 1805 and commendation Napoleon incamera in the national domain.
Currently the church has become the parish of the fraction, entrusted to the Cistercians, who each year to the day of Corpus Christi make up the Flower Festival, a carpet of flowers depicting religious scenes, time, renowned for its religious significance and not only.

Another fraction, accessible along two kilometers. Via Emilia south of Alseno, is Castelnuovo Fogliani, in the past Montebello.
The tower that dominates the houses built at the castle is the symbol of the existence of legal Communitas hominum Castri Novi. To the south of the village of Pieve Campocervaro, held the fourth century and dedicated to St. Peter; this decade after the Mille, while affirming the Church of San Biagio di Castelnuovo with castle and hospital.
The Monastery of Santa Maria delle Grazie is founded by Ludovico Sforza Fogliani in 1488 and the church was consecrated in 1505 is officiated by the Benedictines.
The eighteenth-century church of the castle is attributed to Luigi Vanvitelli and the first stone was laid in 1763 by the Duke of Parma and Piacenza Ferdinand I.
Four kilometers Cortina, spa resort, and equipped for fishing and renowned for good food.
© infotour p. iva 01474490339