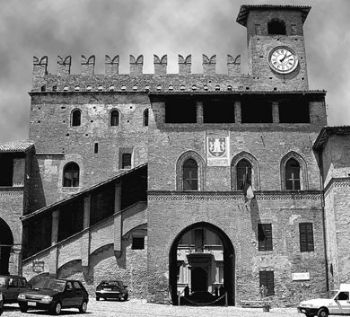 Perched on the foothills of the Val d'Arda, wrapped in a magical dream landscape, came out unscathed and intact from the Middle Ages, as if they had passed these long centuries, Castell'Arquato brings the smell of the immemorial time when the world was Rome, nothing more.
Rome and the Middle Ages have left their mark in the features of this beautiful village, today frequented and popular tourist destination.
The center, which is located to the left of the river Arda, still retains the typical structure of the medieval city, with its cobbled streets, roofs and leaning against the old houses perched along well preserved.
Going even further back in time sometimes seems impossible, even with the help of the wildest imagination, but under the stones of an era that knows avanticristo, another layer of history could not remain hidden. Castell'Arquato and its territory were the "Bay of Whales", from which emerges the idea of something so remote that the charm mingles with fear.
Even before all that we can include, here there was a strip of sea, part of that water that connected the Atlantic and Mediterranean seamless and here lived underwater algae and cetaceans, who left their ancient skeletons in the deposits of mud and clay. Clay and sandstone were the bottom of that sea forgotten that, little by little, even before Rome and the whole of our civilization could not even dream of existence, evaporated, leaving calcium deposits and sandstone, which then became the furnace in which they were built beautiful architecture on which today we hold our feet again.
Waking up from this dream so old, the eyes appears today as the village could be two hundred years before Christ, even before the founding of the colony of Placentia: It is assumed that it was a military castrum of the first Roman colonization, built to control the belligerency between Liguria and Romans.

It was probably a military construction, built on the spur of rock where today you can see the Visconti Fortress, surrounded by a small rural village, living culture of wine and cereals and enjoyed the favored position of dominance in the communication network.
The organization of the center was presumably of military order; had the curtis, namely the organization of agricultural work, the Curia and the parish, respectively the administration of justice and religious life.
Its name probably derives from Caio Torquato, who was owner of the garrison, and then transforms the current name; it is known that he was in the hands of a powerful local lord of Lombard origins, called by historians the Great.
The latter built stone houses, gave to a rural village and urban structure under his domain was built also the famous Collegiate.
Great died without heirs before the eleventh century and the territory was left entirely to the bishop of Piacenza. Since then it has always been an integral part of the territory of Piacenza, being one of its domain on the Po Valley, to the outlets from Borgotaro, from Bardi and the Cisa pass.

With Piacenza has subsequently shared the story, even through the dark periods of famine and pestilence, as that unforgettable fourth century AD, as well as periods of wealth and vitality, including that of late first millennium, in which was home to major fairs, where they were traded agricultural commodities, oil, cattle, cereals and wine.
Its walls have witnessed many events and rules, from Bishop's (789 - 1220 AD), the Scotti and Visconti (1220-1450), to that of the Sforza (until early 1700).
This last rule is followed, in 1707, membership officer of the village to Duchy of Parma and his lords become the Farnese and Bourbon.
Until 1860 it is then part of the heritage of Marie Louise of Austria, before being annexed to the Kingdom of Savoy.
Throughout this long history no grain was lost in the material it is made of this small country. Still intact as immortalized in the moment of its greatest splendor, the medieval one, is symbolized by the overlying Visconti Fortress, built in 1345 with the function of defense, on the foundations of the former Roman fort.

The Visconti Fortress and Collegiate
And 'the Visconti Fortress building more majestic and impressive that appears when the visitor, going on foot to the ancient cobbled street, called "of sunny", arrives in the large old square.
At the end of the way the powerful bastion stands as a giant valley, entirely of brick and topped with lace dovetail, with its small slits that were once the passage of heavy arrows and spears.
Entering in the intimacy of the village, the eyes do not have that wonder for its charming old age and for the scent of history.
The stone houses, all huddled, cobbled streets that tell the steps of the wagons, arches and gates and wrought iron railings, lanterns still on the walls like a thousand years ago; and then small gardens precious hidden himself from the case.

Another gem, dating back to the eighth century AD is the famous Collegiate, already mentioned in historical documents in 756, as a church with a baptismal parish. Was the victim of a violent earthquake in 1117, and it suffered major damage; in 1122 it was rebuilt and rededicated.
The façade, simple design compared to the majesty of the building, he turns to the West and is built entirely of sandstone, in its continuity interrupted only by a small portal, a lancet window and an opening in the shape of a cross at the top .
On the opposite side, the east, there are the apses: the largest has a lodge at the top of round-arched openings, while smaller ones are crowned with hanging arches, also built in tuff and sandstone.
Remarkable is the portal to access the porch place to the west, called "portal of paradise", also in sandstone, built in the late twelfth century.
The arch is richly decorated with columns regents round arches, which protect the bezel where is carved the Madonna and Child; at the base of the architrave two telamons squatting are the support of this beautiful scaffolding.
Upon entering, the environment that welcomes is simple and bright, composed of three naves, the central one is topped by a ceiling of wooden beams, the side by cross vaults and barrel.
That merit attention are the chapel of St. Joseph, the chapel of St. Catherine, the cloister and the baptismal font.

This little gem of Val d'Arda, full of wonders and amazing visions also environmental and landscape, Serbian itself other treasures, such as the Palazzo del Podesta, the Torre Farnese, the Geological Museum and the Old Hospital. And not only ...