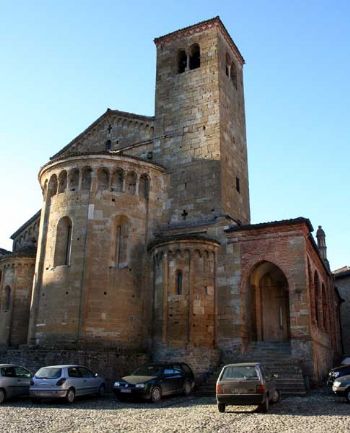 The fortress, built on the foundations of an existing fort was built in 1342 by master wall and wood Rainerio Sacco, John Rabia, William Fabrica and Pierino Sterminito with the supervision of the engineer from Obertino Domezzano.
The plant quite unique, which has no immediate feedback in the fortified structures of the same period in the Po valley, has a form of L.
The lower boundary, rectangular, you set up two separate steps, while the smaller, rectangular well, but characterized by smaller in plan and by a greater development in height, attaches perpendicular to the previous.
At the beginning of the town there are a smaller body down toward the north, the entrance tower with bolzoni and drawbridge, the keep particularly high.
Only one of the four towers is well preserved, while the others are partly ruined. The fortress was not affected by restoration at the end of the last century, only in 1916 he completed the battlements.
In the 70s it was instead restored the moat and drawbridge.
© infotour p. iva 01474490339