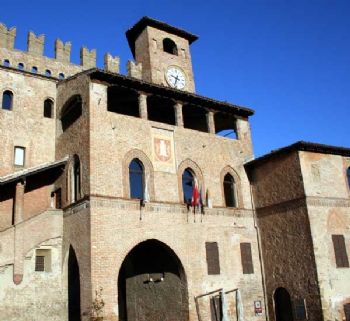 Surely among the most famous and most visited tourist province of Piacenza, was called the Assisi of Emilia for its narrow streets uphill, the medieval houses, the Rock and the environment hilly similar in some respects to the green Umbria.
Located on the left of the Arda river, clinging on a pleasant hill towards the last offshoots of the Po valley.
Castell preserves its ancient characteristic village, rich in prestigious monuments including the Fontanone del Duca, 1292, the Visconti Fortress, the Praetorian Palace, Palazzo del Podesta dated 1239, the Tower Farnesiano end of '500 that all' internal hosts the Fossil Museum and the Museum Illica dedicated to the writer and poet Luigi Illica, famous as the author of the books of the works of Giacomo Puccini.

The lower part of Castell is very different, and modern with a small park and a large parking lot that can accommodate the large number of cars and buses to visit the country. Its territory includes the spa town of Bacedasco, known since ancient times, and with sources of medicinal waters.
The origins of its soil, plenty of clay, water behave particularly effective for balneofangoterapia, and inhalation therapies and gynecological.
The vastness of the park, adjoining land, is to guarantee protection of sources from forms of pollution.
Another interesting fraction of the town of Castell is certainly Vigolo Marchese. It 'a small village that contains two famous monuments now reported from all the tourist guides: the Baptistery and the Church.
Just up the road Carpaneto Vigolo Marchese is a pleasant place, flooded with visitors, who lives his heyday during the folklore among which the "Festival of August" with dances, fireworks, sky diving and gastronomy, recalling every year at this time, thousands of people in four wonderful evenings.
© infotour p. iva 01474490339