the city pallavicina for excellence 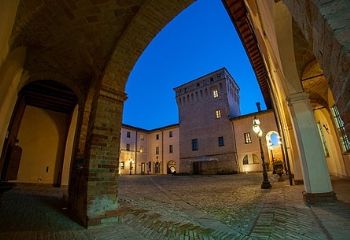 Cortemaggiore you get a view almost suddenly, after a straight stretch that never seems to end, or a series of controcurve that hide from view, appearing exactly as he wanted John Lodovico Pallavicino in 1479: a Renaissance palace from the walls enormously dilated, a chessboard that certainly took up the theory of the "Ideal City" by Leon Battista Alberti, but expanded in the draft Maffeo from Como, quell'alternarsi of red and white squares that is the heart of the emblem Pallavicino, the representation of power marquis.
One grandiose palace for all "magiostrini" built "in the image and likeness" of what the Bramante was making just for the marquis, surrounded by walls and towers, but beautiful vast porches and large volumes perfectly in balance between full and voids.
And 'the city pallavicina for excellence, built to be the most magnificent and imposing of Busseto John Lodovico had had to leave his brother; so, in addition to the buildings and spaces very courtly, Marquis also wanted impressive churches and convents, and his successors, from son Rolando II, embellished them with works of art of great value, even now the pride of the small capital pallavicina .

By Filippo Mazzola, father of Parmigianino, to Pordenone, the Carracci, perhaps Leonardo himself; from Sabbioneta to Antonietto de Renzi, Roberto de Longe, Giuseppe Natali and Carlo Bonisoli, Giovanni Battista Tagliasacchi, to Gernaardt, Domenico Dossa and Bernardino Boat, Cecrops Barilli and Francesco Scaramuzza, author of the "Virgin of the Angels" that inspired Verdi in the composition of one of his most famous choirs.

The Pallavicini, therefore, were not content to build a grand palace for all "magiostrini", including priests and monks, but embellished and endowed with all the essential services: since 1495 there is a fact that in Cortemaggiore Hospital, located at door which led into the village from the road of Cremona, then also open to pilgrims from the Lombard city traveled to the Via Francigena to Rome and they found here welcome and care when needed, with 12 beds and a doctor salaried by the Marquis; but this hospital also had the task to meet the needs of the poor throughout the state of Cortemaggiore, as well as (surprise, surprise - we are in the time of the Spanish Inquisition!) the payment of a large sum of money for the rehabilitation of a prison inmate Cortemaggiore, then sentenced by the same laws by Marquis, ie an absolute gentleman.
This is the heritage more alive than the family Pallavicino left, Cortemaggiore, to its small Capital: humanity, charity, hospitality, respect.
And, with these, more hope for all.
Cortemaggiore is, even today, especially this: art, history, culture, immersed in the tradition of hospitality that makes the Lower one area, a "Small World" with a big heart!
© infotour p. iva 01474490339