along the right bank of the River Po 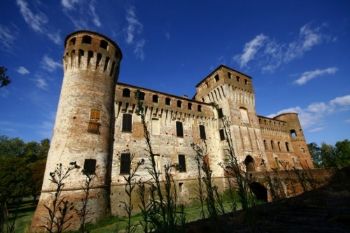 Its one of the major centers of the province of Piacenza, located on the right bank of the Po at about ten kilometers from Cremona.
Of Roman origin, was a fief of the Visconti and Sforza, passed in 1400 with Pallavicino and mid-1600s to the Farnese.
Its structure is well ordered, with a main street lined with arcades and intersected by several districts.
The term significant and well-documented culture and civilization monticellese, are the museums of the Rock, with the Civic Museum, operated by the local collecting memorabilia, manuscripts, and works of distinguished citizens from the cultural, artistic and historical; the Ethnographic Museum of the Po Group Cultural Exhibitions, is a vast collection of objects documenting the life and agricultural riveriasca local; Aquarium of the Po has the most varied species of fish that inhabit the great river.

A must of Monticelli is the Rock, built by the Marquis Pallavicini dating back to 1400.
It still retains the powerful and noble rooms with ceilings decorated with allegorical frescoes, and prisons, which occupy the upper rooms of the towers.
Real pearl of the building is the chapel of the Court, a real jewel of art fifteenth-century frescoes of the painters Bonifacio and Benedetto Bembo.
There are numerous paintings.
We have worked illustrious masters of the fifteenth and sixteenth centuries; There are some fine stucco seventeenth century by Domenico Righteous, the marble altars and sacred.

Also worth visiting is the Basilica, built in the second half of 1400 by Msgr. Carlo Pallavicino, lord of the place and the Bishop of Lodi. Its architectural lines, originally of Gothic-Lombard, were significantly modified in 1600.
Is 'in the shape of a Latin cross with three naves, rich in valuable paintings and is dedicated to San Lorenzo martyr. It was in 1942 that Pius XII elevated it to the rank of Basilica.

Among the typical local farm products of which emerges the typical garlic Monticelli boasts of being the capital and characterizing the annual fair on the first Sunday of October.
© infotour p. iva 01474490339