grows at an altitude of 229 meters. 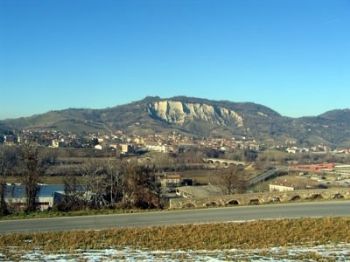 The territory extends on the northern Apennines Piacentino, Chero from the coast between Chiavenna and Val d'Arda, descending from the northern slopes of the mountains and Moria Rovinasso to the last offshoots hills to the plains.
The common area has an area of 54.3 sq. Km, the capital is located 229 m. above sea level, on the left bank of the river Arda at the foot of Mount Yoke (m. 460).
The main fractions that are encountered in the southern part are agglomerations of Vicanino, San Genesio, Antognano, Veleia Romana and Rustigazzo.
A succession of rugged slopes and short plateaus characterizes this area where you can still notice the typical stone buildings.

The capital is developed under the "dome" of Mount Yoke, characterized by geological formations with Pliocene marly clays blue.
The high erodibility of such training has given rise to the phenomenon of the badlands, a distinctive feature of the center of Lugagnano.
To the north east of the capital of the territory is enclosed in the waterways of the Chero and Chiavenna. Here the land is softened and has a natural setting of breathtaking beauty. The presence of man, especially in Val Chiavenna did not affect much the original context.
The main fractions that meet on this side are those of Chiavenna Rocchetta, diol, and Ottesola Prato, near the creek Chero, the agglomeration of Tabiano.
© infotour p. iva 01474490339