an area that recounts centuries of rural life 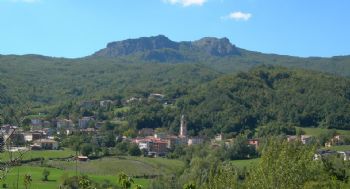 The municipality of Morfasso is divided into two valleys: the wide dell'Arda and that of Chero, both rich in water, forests of oak, beech, pine and chestnut trees, but also mushrooms, trails and history.
Here the structure of the mountains takes the form of an amphitheater: the Carameto (1,319 mt), Pass Pellizzone (1,105 mt.), The Cravola, the Lama (1345 mt.) With a vast plateau of grasslands, the Menegosa (1350 mt.) with its appearance dolomite, the Morfassina and Santa Franca, which took its name from the daughter of the accounts Vidalda, retired here in 1215 to escape the wrath and contention between the factions of the city: this mountain stands the Saccello venerated by the faithful, element of beauty and prayer where, twice a year during the summer months, thousands of people gather.

The area of Morfasso recounts centuries of rural life, keeping many traces, such as stone houses. In recent years, researchers and archaeologists have found evidence of the presence of quarries of jasper at the foot of Mount Blade, dating back to the Paleolithic. Here they settled the Ligurian, the Romans and the Lombards.
The Abbey of Tolla, in the village of Monastero, played a major strategic role from the seventh to the eleventh century .: was a landmark political and economic, partly because the valley was covered by a section of the Via Francigena from Fiorenzuola reached Castell 'Arquato, predominance; not far from the church of Santa Maria and blessed by the fountain, there was a hostel for pilgrims.
On Chero dominates instead Mount Moriah (1,070 mt.), With a large plateau known as Provincial Park, which is also rich in forests and beautiful chestnut.
The whole area of Morfasso offers inhabited ideal for summer holidays, for hiking and mountain biking.

The capital is collected around the seventeenth-century bell tower and the beautiful church. In the hamlet San Michele, in Chero, operates a campground, while the fraction Monastery you can enjoy a beautiful view.
Rusteghini and Rocchetta have old houses and lanes, while Rocca dei Casali is a rugged rocky outcrop sull'Arda of 872 meters, used as a gym by climbers.
This territory was affected by the phenomenon of migration and there are representatives of the community morfassina in France (from Rusteghini and Teruzzi), the United States (from San Michele), London (from Monastery).
This corner of Alta Val d'Arda can therefore rightly be considered a reservoir of citizens of Europe.
© infotour p. iva 01474490339