visit to the castle of Vigoleno 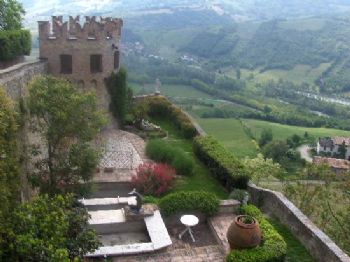 It's 'one of the most picturesque walled town of Piacenza, which stands on the border of the Parma area.
Welcomes a castle among the most beautiful in the whole province, built in 1400 as a defensive fortress, overlooking the valley below and the plain towards the Via Emilia. A large courtyard with a porch is enclosed by two round doors and a crenellated walls.
In 1700 the courtyard was used as stables for riders. In that century was the domain of the Pallavicino and later of Scotti who, with Alberto one of the greatest exponents of the Guelph party, made it almost impregnable.

In 1389, destroyed the foundations, was completely rebuilt by the will of Scotti.
The story then that Vigoleno seized before the City of Piacenza, then the soldiers of the church, then the Ghibellines.
After these and other feats of arms the castle returned permanently to Scotti, who remained until the beginning of the current century.
Succeeded in following different owners and in 1970, with Dr. Olivares, subìl'ultimo and impeccable restoration.
Of great interest over the castle, the old village also has the church of San Giorgio, in Romanesque style, with works attributed to the early '200. Complete this architectural gem stone houses and picturesque cobbled streets.
© infotour p. iva 01474490339