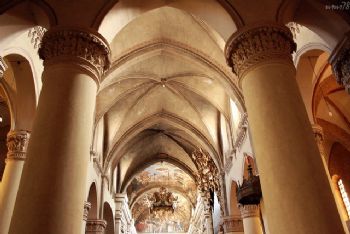 The Basilica of St. Antonino is one of the most interesting results of the architectural culture of the eleventh century, characterized by a period of intense experimentation.
It was in fact adopted a typology planimetric rarely attested in Italy: the basilica plan, with three naves, oriented to the east, with the western transept, which are known a number of examples Germanic.
For the strangeness of this model in the architecture so-called Lombard, the current building was interpreted, at the local, such as adapting the next three campaigns constructive.
In today's factory would therefore conspicuous structures of earlier buildings built in the fourth century (identifiable with the current transept) and IX (with a body to cross the aisle which would be modeled on the previous church while the transept would be constituted by the current west work and part of today's nave).
In fact the current structure, made naturally abstraction of subsequent interventions, is the result of a single site, identifiable with that funded by the bishop Sigifredo in 1014.

The building, divided into three aisles by mighty pillars, receives an unprecedented articulation of the west to the presence of the tower, scheduled for donation document of 1014. The high pillars are connected with the arches by cubic capitals from the corners cut edge Net , different from the more common type cubic notched, highlighted by tastings.
The uniqueness of this construction is further confirmed by the presence, in the attics of the nave, of an extraordinary cycle of frescoes (mid XI century), which was to involve the entire building, as indicated by the fragments at the base of the tower and in the attics of transept.
Divided into two registers, in the lower one depicts bearded men, perhaps prophets, perhaps sitting variously arranged within a painting gallery, formed by the alternation of spiers and arches, which build themselves on slender columns topped with fanciful capitals, while in the higher the busts stand with immobile frontality in boxes spared by a meandering cross.

Outside the building, which is fully readable in the yard of the eleventh century with the arches and lancet windows, partially blinded those of the nave, stands out for the bold opening the atrium leaning against the headboard of the north transept, the work of Pietro Vago in 1350.
The portal is decorated with beautiful sculptures of the twelfth century, whose recent restoration has revealed the preciousness and the fineness of execution, enter the building.
The many interventions that have followed by the erection of the time (1466) the creation of several chapels (eliminated in some radical restoration of 1930 directed by Giulio Ulisse Arata), the expansion of the choir in the sixteenth century, some interventions baroque, the complex intervention century that reshaped the building according to the canons Gothic then in vogue, make it difficult for the factory and the interrelarsi same for all operations.

Even though there is some works of great interest: the remains of an altarpiece with the life of St. Anthony, by Bartolomeo Groppallo of 1455-56 (sacristy); the vault of the choir and presbytery decorated by C. Gavasetti in 1625; the four large paintings attributed to the Flemish painter De Longe (1693) in the choir, the Last Supper of the Genoese painter Bernardo Castello (Chapel of the Blessed), a wooden crucifix with Mary and John the fifteenth century (right aisle).
© infotour p. iva 01474490339