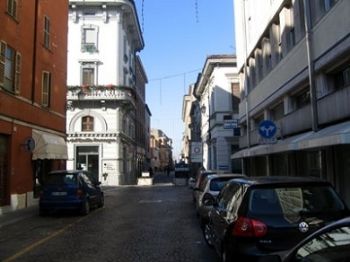 The visit can start from the Collegiate Church of San Fiorenzo, a monument to a certain charm founded in 1300 and rebuilt at the end of 1400, built on the area of the ancient church of San Bonifacio.
Located in Piazza Fratelli Molinari has a tripartite facade crowned by pinnacles with a large Renaissance portal terracotta.
On the left of the building stands the imposing Civic Tower in Gothic style, as well as the interior of the building in three naves divided by large cylindrical pillars supporting arches and vaults.
The Crucifixion and The Story of San Fiorenzo are important frescoes of the '500 performed by Lombard painters industrious at the end of that century. Beautiful work of art is the main altar made in Rome and designed by Gian Paolo Panini and consists of precious marbles yellow and blacks.

The church of Our Lady of Caravaggio, built in the seventeenth and eighteenth centuries, is located in Via Melchiorre Gioia and shows a high portal flanked by columns and crowned with pediment and archway depressed center surmounted by two baroque windows. Inside the temple are enclosed two large oil paintings and a painting depicting the apparition of Our Lady to the young Jeannette in a meadow near Caravaggio (Bergamo).

Other monuments are the Oratory of the Blessed Virgin, the Teatro Verdi and the church of St. Francis, as well as the Palazzo Grassi (XV sec.) Adorned with a frieze Renaissance terracotta and two lancet windows and Palazzo Beltramini with a vast cycle frescoes by Bartolomeo Francesco Natali Rusca and between 1723 and 1725 that represent other important buildings.
© infotour p. iva 01474490339