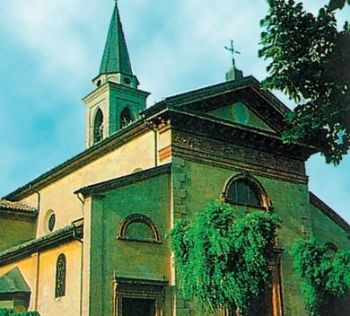 A 2 km from Cortemaggiore from Busseto and 6, the territory of Besenzone extends between the two banks and dell'Arda dell'Ongina and presents the villages of Castel d'Arda, Mercore and Bersano which have lost some medieval features.
His church is dedicated to San Vitale Martyr; consecrated in 1922, has three naves and a Latin cross, a bell tower rebuilt in Byzantine style, while the previous Romanesque era, and paintings dating back to 1933 made by the Cremonese Gracchi.
Its founder was the Marquis Pallavicini Cortemaggiore and later became the property of Cardinal Sforza in February of 1576.
In 1901 the temple and canonical threatened to collapse so were demolished and rebuilt in the same place.
Besenzone lives mainly by agriculture with its screws and the vast expanses of fields for the production of tomatoes, beets, fruit, garlic, in addition to wheat and fodder. Nearby, a few kilometers, Villa Verdi in Sant'Agata of Villanova on, Busseto Clairvaux and the Dove and its famous Cistercian Abbey.
© infotour p. iva 01474490339