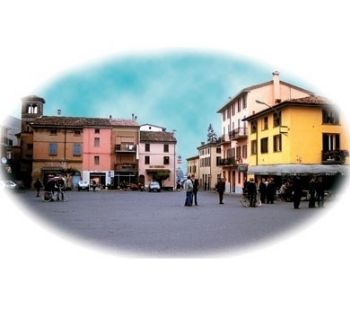 Currently the castle, which has a porch with sandstone capitals and friezes of Scotti, houses the Town Hall and the primary school in the country.
The economy is mainly agricultural: corn, tomatoes, sugar beets, fodder, corn, vines for table grapes and wine, vegetables and fruit trees.
In recent decades, however, there was a significant commercial and industrial development.
Carpaneto is also recognized as the undisputed capital of the cup, the delicious salami made from the noble pig.
In his honor the popular festival, known throughout the country and organized every year for the first Sunday of September, regularly draws thousands of visitors who can enjoy on-site and then bring home the cup from the genuine characteristics provided by the proposed Act Doc cup, which provides a limited production of an 'area between the torrents Ongina and Tidoncello. In the occasion you can appreciate the traditions and folklore of the country, with the band parading through the streets overflowing with colors, bottles and joy.
The territory of Carpaneto includes interesting villages rich in history.
Montanaro is from Carpaneto about four kilometers and is located in the Val Riglio; its castle seems to date back to the fourteenth century, was Cossadoca accounts, the accounts of Castelnuovo Valtidone, Ferrante Portapuglia and finally the Count Gian Francesco Morazzoni that in 1692 restored it and turned it into the next century mansion; its courtyard houses an elegant portico with columns.
The village of Zena welcomes a castle in which a hall bears frescoes of the '700; also worth visiting the church of San Prospero, for the collection of valuable works of art sacred.
A Cerreto Landi interesting fort square plan, with three massive square towers and a fourth on the front entrance that still has the joints of the drawbridge; surrounded by a park, still keeps intact its past.
The castle, in 1300, was the property of the Landi, later became Andrea Giacometti and then Gian Angelo Gazzola, ducal ambassador in Britain.
And even among the most important localities is definitely Ciriano with the church built in the '600, famous for its dome; were built after the fire that destroyed the previous church in Ponte San Giacomo.
For a dozen kilometers from Carpaneto is one of the most significant examples of fortification, both for the particular position, for both simple and eventful together with an irregular walls: Castle Magnano.
The earliest records date it back to 1288 and are linked to the Della Volta Landi and Mencassola; was sold to Scott, then passed to Morazzoni and Casali before being bought by Valentino Garbazza.
Badagnano also provides insights of historical interest, with an imposing stone castle and the church of St. John the Baptist; very nice is also the small cemetery between cypress, pine and oak trees with the background full of songbirds.
The other districts are: Chero, Rezzano and Travazzano and, in Val Vezzena, Cimafava and Celleri.
© infotour p. iva 01474490339