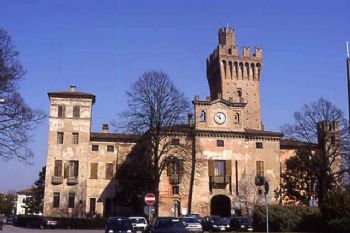 Crossed the river Chiavenna backdrop to the town of Caorso, found along the ancient Via Postojna, neighbors poplar Po that give way to what has been called the "cathedral Atomic", also known by the name of Hugh and ie the nuclear power station, built in the 70s and now disused.

The river Chiavenna, cross country, Caorso divided into two villages, the main one on the left, with the beautiful Rocca now the Town Hall, schools, shops, homes, and the one on the right bank with the Church of the Assumption, full of remarkable frescoes dating from the fifteenth century, and asylum built by the people and dedicated to the war dead. The territory includes the villages of Muradolo, Fossadello, Roncarolo, Zerbio.
© infotour p. iva 01474490339