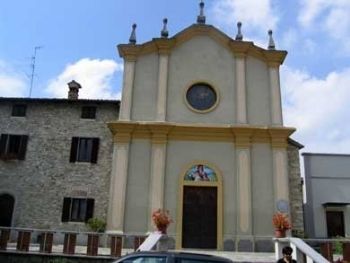 In the area of medium hills, the landscape is characterized by cultivated fields almost everywhere and well cared for, while in the area of high hill overlooking the coppice.
Wherever there is a widespread presence of small rural villages and scattered houses, mostly stone, that characterize the landscape.
The road network is made up of a dense network of roads, municipal and vicinal many places currents along the ridges, from which it is appreciable the gently rolling hills with sweeping views of the plains, and when the visibility is good, even the Alps.
Castle Piozzano, Castelvecchio, little remains; former property of the Monastery of S. Savino, and then passed to the accounts Lomello to Arcellis, then to Veggiola and, for extinction of their male offspring, to Paveri Fontana.
In 1636 it was conquered and destroyed by the Spaniards; Following this destruction was built a new fort, told The Canova.
In 1633 it passed to Paveri Fontana who kept it until the end of '700 when sold it to the family of Rizzi.
Tradition has it that an underground tunnel connecting it to the nearby castle of Casanova Chitti.
Transformed into an elegant manor house, does not hide the origins of war.
Nearby the villages of Groppo, Vidiano, Pomaro, St. Gabriel, and Monteventano Montecanino preserve ancient fortified dwellings
© infotour p. iva 01474490339