Piacenza to see: the Municipal Theatre

was baptized at first Teatro commutative 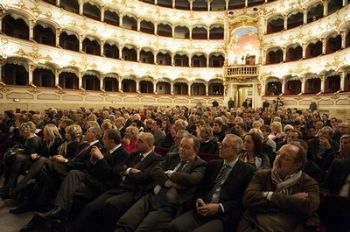 The construction of the theater, that stands on the Palazzo Landi Stone disused, was promoted by a group of aristocrats Piacenza, to replace the one at the Citadel, destroyed by fire on Christmas Eve 1798.
The plan was approved by the Administrator General Moreau de Saint Mery, governor on behalf of Napoleon, provided that the expenses were incurred by the client aristocratic, which also undertook to make public the building after ten years.
The project was entrusted to Lothair Tomb (1749 Sarmato - Piacenza 1823), an architect of neoclassical tendencies that had already been reported in the arrangement of the facade of the Palace of the Governor and the choir of S. Maria di Campagna.

The 'building, begun in 1803, was solemnly inaugurated September 10, 1804. The company building, built in a short time during the French domination, participates in a climate of fervor that led to the design of the most extraordinary buildings of this kind, the Theatre the Fenice in Venice, the San Carlo in Naples, La Scala in Milan.
The latter theater, built between 1776 and 1778 by Giuseppe Piermarini (Foligno 1734-1808) formed an essential reference model for the building of Piacenza.

Great emphasis is given, inside, the space for the public, in two rows of boxes and two galleries, surmounted by a gallery and a major audience.
L 'adoption of the elliptical, compared to the usual audiences horseshoe Scala in Milan or the Regio di Parma, has achieved optimal values audible and visual.
Made public by a decree of Maria Luigia de11816, was baptized Theatre commutative.

Ten years later Alessandro Sanquirico (Milan 1777-1849), designer of the famous La Scala in Milan, was commissioned to decorate the proscenium, the great time and a great curtain. Similarly Sanquirico you built the neoclassical facade, set, with some modifications, on the basis of the project's Tomb, which is characterized by the sober porch ashlar, with the central part projected forward and topped, at a more backward, from the eardrum set ionic columns (1830).

Other interventions, which involved the organization of space subsidiary, were executed in 1857 by Paul Gazzola Piacenza (1787 -1858); on this occasion Gaetano Alberrelli decorated the hall, Girolamo Magnani (Fidenza 1815-1889) designed the decoration of the ceiling of the auditorium by backing the chiaroscuro, while Paul Bozzini (Piacenza 1815-1892) decorated the four medallions.
Even in the course of the twentieth century were some changes: in 1938-39 were shot down the partitions of the boxes in the third and fourth order, creating two tunnels, while in the 70s were enhanced services.
© infotour p. iva 01474490339