with the Archaeological Museum of Valtidone 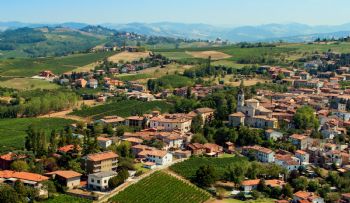 We return, with this appointment Vissi Travel, visiting this land rich in history and full of flavor. And this our beautiful province, Molina has certainly all the credentials to be considered one of the municipalities of Piacenza with the highest density of typical products.
And 'enough, in fact, slide the eye along the contours of the landscape to realize this; ordered and manicured vineyards covering gently rolling hills in a fervent campaign of activity to be a reality, certainly economic and productive, but also social and cultural, that has always linked its fertile fields of its own future.
Come to know the territory enclosed within the villages of Cooker, Montalbo and Vicobarone, not before he visited the capital Molina.

itinerary
Elder is a quiet little town, enlivened by the activity of its people living daily life consisting of simple but important things. A company firmly anchored to the true values of life, where family and work are at the top, where the socialization and a healthy entertainment is consumed in the local public that open along the streets of this country.
And this is the air you breathe, that of a community united and bound by sound principles.
In addition to that of a pure nature, rescued by those forms of environmental pollution and noise drastically lowering the quality of life. Even today I am in the company of Maria Teresa Bergonzi, Head of Tourism of the municipality of Molina and, with her, I'm going to visit the Archaeological Museum of Valtidone, housed in the basement of the Rock Hall, which contains many examples of ancient history, with exhibits archaeological found in the territory.
The old fortress is also the Church of St. Paul the Apostle with coffered ceilings and brick vaults, as well as valuable paintings and a nineteenth Via Crucis, by Luigi Achilli of Borgonovo. Inside a valuable organ built in 1854 by Antonio Sangalli.

Maria Teresa's start with the path that leads us to the first stage represented by Cooker.
Here we visit the church which is located within the Company Tower Cooker, where every Sunday Don Pietro Achilli celebrates mass.
We pass the small town of Crosignano rights and we aim to Luzzano Castle, which stands on the edge with the Oltrepò Pavese, on which borders, in the territory of Rovescala, with part of the land, as the church dedicated to Saints' 800 Narbone and Felice.
Next stop is Vicobarone, reachable in a few minutes, after crossing the loc. Mula, then cross over into the land bunting with the fraction of Iron Bell, and back again in Piacenza in loc. Villa Pallavicini.
And so we come to Vicobarone, overcoming a first sausage factory, then the Cantina Sociale.
This is one of the oldest settlements in the municipality, with a castle that has been the subject of numerous interventions over the years, the last in the nineteenth century by the Marquis Serafini Malvicini Orazio Fontana.
At the same noble family is due the construction of the church of San Rocco, dating back to 1625.
Next to the ancient castle stands the church of St. Columban Maggiore, the main religious building of Vicobarone. The entrance is dominated by a grand staircase, while inside stands a marble altar of considerable size, from the church of Sant'Agostino in Piacenza, closed for worship since 1803.
The altar was instead donated by Domenico Sforza Fogliani in 1857. as a quality also the canvas depicting the Madonna Immaculate work of nineteenth-century Camillo Scaramuzza.
The former primary school is now home to various charities, as well as hosting the Museum of Rural Management of the Cultural Ped'Fer. Also equipped with a motocross, Vicobarone is, with Molina, the most active and productive of the municipal.

We'll leave it to reach Montalbo, just 3 miles, passing the Diola, the highest point of land with 350 meters of altitude. The beautiful church of San Cristoforo which houses some editions of Valtidone Festival. Here, on the left side of the Tidone, stands the ancient castle dating from the twelfth century.
Always at the center of battles was repeatedly the subject of contention due to its strategic location. Destroyed twice, in 1215 and, later, in 1516, saw succession seven families and the last, who turned it definitely was one of Scotti. The entrance is dominated by the bell tower, certainly the oldest part of the castle. Always through strips of asphalt that interrupt the vast expanses of a rich and productive vegetation, we take direction Ziano where our journey ends.

tourist itineraries
On the territory of Ziano are reported and several viable paths to be covered by bicycle or on foot. Below we suggest three.

Around the Old Tank
Among the vineyards of Vicobarore
Departure and arrival from the square of Vicobarone
Yellow signs
Refreshments to Vicobarone and Badenico
Length 4400 mt.
average gradient of 7.3%
Duration: 80 minutes walk

October
Walk to the end of harvest

Farms of excellence of the province of Piacenza
The Farm Negrese
Loc. Negrese
It takes its name from the area on which it stands and is easily reached in a few minutes from the center of Ziano that Borgonovo.
Recognized as one of the leading farms in the province of Piacenza, has also awarded certificates of merit by the Touring Club and the Gambero Rosso, thanks to the kindness of its cuisine, which enhances the company's products.
The authenticity and freshness are the basis of every dish, prepared according to traditional local recipes.
The bread is baked daily, and the pasta is strictly homemade; on the table are served tortelli Piacenza, pisarei and beans, noodles, panzarotti, swallow nests, passatelli, anolini in broth, while among the second courses stand out the braised wild boar and the mules with polenta, roasted Cup, roasts and boiled mixed among them the hens of the henhouse.
It closes with homemade desserts and digestive always of own production.
The friendly environment and the family are the ideal setting of this place of gastronomic culture and are a guarantee of a service is always attentive and friendly. The rustic rooms are equipped to accommodate ceremonies and banquets.
Adjacent to the catering facility is the house used to hospitality, with simple and functional rooms.
In the same court, you can visit the winery for wine products always in line with the quality that characterizes The Negrese.
In summary: a welcoming, good food, attentive service, family hospitality, moderate prices.
Just enough for a visit.