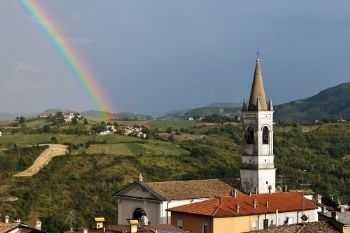 Its territory extends to the northeast-southwest, reaching the border with the province of Parma and is made up of three parallel valleys of the rivers Arda and Ongina Stirone.
The southern part, typically dominated by mountains and forests and the largest artificial lake in the resort Mignano, occupies the right side of the Val d'Arda.
Its hamlets are typical rural villages, consisting largely of old stone buildings, as in the case of Vezzolacca, Castelletto and Settesorelle.
Here the only economic resource, represented by agricultural crops torn the mountain, caused a great emigration, making it almost depopulated the old countries who return today to be experienced in the months of summer vacation.
To the north of Vernasca, located in central position with respect to the territory, the pads will soften and, falling, forming expanses hills often covered with vineyards.

In this context we Bacedasco Low famous for its wine production, along the valley of the river Ongina. Near Bacedasco we find the area of the badlands of Mount La Ciocca, area inside the Natural Reserve of Geological Piacenziano.
The territory is located on the border with the province of Parma, marked by Stirone river. A large portion of this auction river was declared a Natural Park in 1988 for the presence of interesting elements both from the geological point of view that nature.
In this area, just to lick the Regional Park River Stirone stands Vigoleno, a walled medieval town of rare beauty, surrounded by a beautiful expanse of vineyards.
The torrent Borla marks the upper part of the valley and the name also to the neighboring inhabited. Dense woods and a very low human presence characterize this environment from the connotation strongly mountain whilst being at an altitude hilly.
This peculiarity is due to exposure to the north of the narrow valley that together with the abundance of water, makes the environment particularly cool and moist.
© infotour p. iva 01474490339