Churches in Piacenza: the parish church of Sarmato 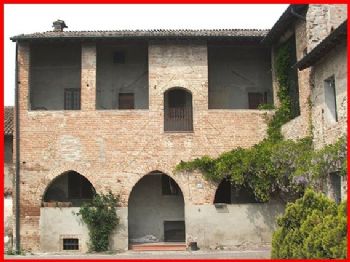 The foundation of the church dates back to the eighth century. AD at the hands of Burnengo or Buringo, Lombard prince.
The parish already existed in 1200, but the documentation part of archive from 1572, since that prior to such date was destroyed by fire.
The temple, dedicated to St. Mary of the Assumption, has undergone many transformations; dated back to the pre-existing Sec. XVI and was three naves with times to round arches.
The magnificent rectory, now restored, was built in 1715 by Don Giorgio Zanettini, as votive.
The bell tower, begun by Don Francesco Boeri in the second half of 1700, to replace the low and dilapidated, was completed in the nineteenth century.
In prewar Don Giuseppe Spagnoli, to meet the rise in population, decided to lengthen the church.
With the intervention of the architect.
Berzolla was converted into a church in Latin cross, with a transept and apse Buovo.
The current facade, brick and cement coating faux marble, was built in the decade 1950-1960.
The heaviness of the front favored the collapse of the roof of the left aisle May 22, 1964.
Don Bruno Sidoli riprtistinò the church on the basis of two main criteria: - delete the old part for safety reasons - to transform the church according to the directives of the Council Today the church has three stylistic features discontinuous: -facciata style -the twentieth century nave -l'abside modern neo-Renaissance.
Inside are preserved: a priceless statue of Our Lady of the Rosary of the eighteenth century. of sure hand Geenaert, a wooden statue of the seventeenth century. depicting St. Catherine of Siena a picture of a 1600 depicting St. Anne and St. Lucia, a painting of the nineteenth century of St. Anthony of Padua.
In the apse is the picture of Our Lady of the Assumption, a work by Enrico Prati 1891.
The organ, which is now located next to the apse, preserves traces of ancient Serassi.
© infotour p. iva 01474490339