in the center of the country is impressive and well preserved 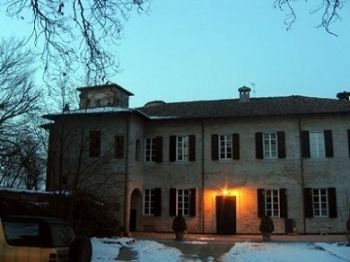 Presumably a fortified village already existed in the year 1216, when the day of Pentecost met there militias Piacenza and Milan before moving to the forts Pavia.
Castle Sarmato constituted fact, together with Castel San Giovanni and Borgonovo one of the most important outposts designated in Guelph Piacenza to the defense of Val Tidone against enemy raids, not excluding those buttressed by ghibellina Pavia.
In 1270 the castle, held by Pallastrelli, was severely damaged by Ubertino Landi, lord of Bardi, in one of his raids.
In 1376 Lord of Sarmato, on behalf of Galeazzo Visconti, is Bartolomeo Seccamelica, but in the early years of the next century the castle belongs to the Scotti which, however, is disputed by rival family of Arcellis.
Surrendered to Francesco Carmagnola, occupied by Luigi DalVerme, involved in the struggle between the Sforza and the Visconti for the possession of the Duchy of Milan and the same city of Piacenza, the castle finally returned in possession of Alberto Scotti who died in Milan in 1463.
In this noble family, who in 1517 took part in three jails in the Battle of Lepanto, he remained until his extinction, which occurred in 1863.
On that date the castle passed by inheritance to the Counts Zanardi Landi who still retain.
The complex castrense is enclosed within the perimeter of the square walls, already surrounded by a moat, largely preserved along with two corner towers and the imposing southern entrance consists of a ravelin embattled with porte cochere and pusterla, both already equipped with drawbridge; double goalscorer side allowed the defense with shooting grazing.
Two other fortified entrances are kept on the east and occindentale, the first of which is now the north side municipio.Il whose walls have a broken trend is occupied by the Rocchetta, who had to fend off attacks from the Po, transformed in a residential campaign in the last century, with large rooms and vaulted period decorations.
Also in the North, but most backward Castle stands true with corner tower pointed at the northwest corner and the high tower in the inner position, articulated around a courtyard already closed on all sides and is now open to the south; retains the original features of the curtains with the typical cornicie sawtooth under the battlements and windows with pointed arches.
Inside there are several large halls, partly vaulted and coffered in part, small living rooms, bedrooms, all furnished with period furniture.
Along the way inside of Borgo is well sicentesca church dedicated to Carlo Borromeo, the linear façade enclosed corner pilasters and pediment top with inside a nave vaulted.
In this complex interweave the history and legend of St. Rocco, St. Gotthard Pallastrelli and San Giacomo di Compostela; the latter is kept the statue in the fortified village for devotions Romei who stopped here along the pilgrimage to Compostella.
Sarmato, in the Middle Ages, is an important hub for the transit of the Via Francigena.
This coincided from west to east with the road Romea and from south to north along the Borgonovo, with river ports of Veratto " style="color:#993300">and Sarmato.
In places Bettola, whose name recalls from time immemorial the presence of an inn with manure, the crossing of these steps, as if to protect the main entrance of the village, the sarmatesi wanted it to be erected a small chapel.
It will, in time, had to undergo many transformations, Romanesque in the back oldest, with arched apse, and in the front with Gothic arches and terracotta decorations of the century. XIV, open and fashioned porch to rest for the pilgrims.
Inside there was certainly a statue of St. James, currently kept in the shelter of the castle.
The map shows the Napoleonic yet this function of the building prospicente the Via Emilia, called "Casino" or small house.
The current structure, which does not hide its characteristics of remarkable artistic importance, dating back to the early decades of the nineteenth century.
This building is, in fact, the business card of the country and would require an intervention of preservation and upgrading, as part of the local artistic heritage.
Still remains a significant testimony to the centuries-old hospitality of saramtesi not randomly have chosen as a patron saint pilgrim, reminiscent Gottardo who became a pilgrim and Saint James the Apostle in Compostela that has drawn millions of pilgrims and is revered by the classic iconography of a viandante.il
© infotour p. iva 01474490339