perfected his technique in the study of Gustavo Foppiani 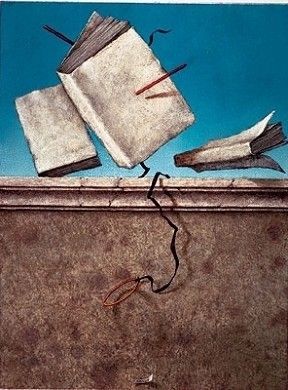 Armodio, born in Piacenza in 1938, he attended the Gazzola in 1951-52 and complete their training in the study of Gustavo Foppiani.
He learned the technique of tempera, which improves gradually, adapting it to their own expressive needs.
At the same time he devoted himself to the study of the techniques of the old masters, from Pompei to freschisti mannerist of the seventeenth century.
He spent the entire 1969 in London where, through the knowledge of painting Indian, Persian and Japanese, discovers a new vision of colors and techniques.
From then until now, has played an intense exhibition at the most famous Italian and foreign galleries, while directing his own pictorial research towards a more thorough-sounding expression of the human condition, understood and played in the manner of a tragic non- sense.
© infotour p. iva 01474490339