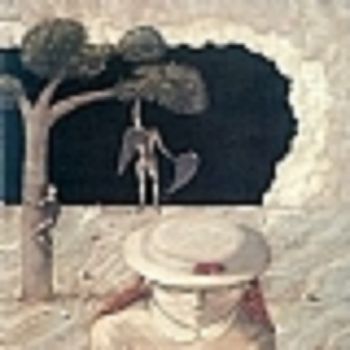 Still Gazzola Institute, as well as by the Toschi Parma and the Accademia di Brera, come the new generations of artists that were imposed after 1945.
It is Gustavo Foppiani, Lodovico Mosconi, Cinello Losi, Giancarlo Braghieri, Armodio, Carlo Bertè, Bruno Grassi, Romano Tagliaferri, William Xerra, all still young, and the oldest Luciano Spazzali.
In all these painters, of course with a diversity of personal preference, are the invention and imagination to start the creative process rather than the vision of reality.
It fact, when it is present in the works, is interpreted and dominated by fantasy, by the inspiration of the imaginative painter that demystify the deformed through symbols and paradoxes.
These artists also have in common a certain melancholy and nostalgia of a reality now remote and non-existent, a reality serene, innocent, almost mythological.
Gustavo Foppiani, born in Udine in 1925, he moved to Piacenza in 1930 where, in the second half of the forties, he attended the Art Institute Gazzola.
Came into contact with the Obelisk Gallery in Rome, participated in numerous exhibitions in Italy and abroad.
In the seventies, working instead with the Galleria Forni di Bologna and then, since 1975 and until his death, August 5, 1986, with Philippe Guimiot Brussels.
His painting, until the Seventies, offers a world of fable and dream, inspired primitive and mediated representations of Klee and Miro, where the change in graphic blood and affects the surfaces with sensitive material informally.
In the eighties, the vision and the story became more realistic, but always feeding the symbolic content of the fantastic.
© infotour p. iva 01474490339