Futurism, Cubism, Surrealism and beyond 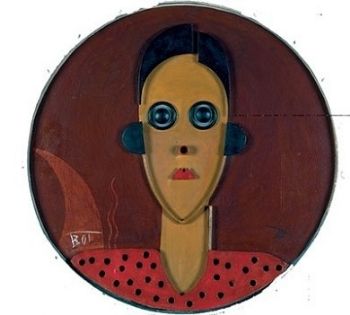 ll most extravagant and whimsical painter Piacenza of all time is definitely Osvaldo Bot, still shaken by a flood of ideas, initiatives, cultural and artistic ferment.
His painting was not immune to any of the experiences of European art, from Post-Impressionism to Cubism, Surrealism Expressionism, Futurism art object, thanks to his lively sense of rebellion and protest fashions traditional and conventional.
Its design was quick, essential, stylized but stylish and its colors were used according to the state of mind of the painter.
Became clear, sung in beautiful lyrical moments; dramatic and intense in moments of anger and despair.
Friend of Marinetti, let futurism touched his painting without condition it too.
He studied in Milan at l '"Humanitarian" and left the school tightened its relations with the artistic and cultural scapigliatura Milan.
In the 30s began work on the first series of "Ferroplastiche" and tied to the futurist movement, participating in numerous exhibitions with the artists of the group.
He published essays futurists, including Self futurist, with a preface by Marinetti, the futurist and Flora. Also created billboards and playing cards Futurist and founded in Piacenza a seat of the movement.
In the second half of the thirties was in Libya where he published brushstrokes on Africa and held a solo exhibition.
After the Second World War produced the series carto-painting emonotipi.
He died in 1958.
© infotour p. iva 01474490339