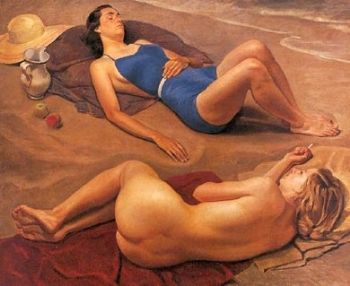 Between the two world wars and until the middle of the century expressed their full artistic maturity many young painters like: Luigi Arrigoni, Luciano Richetti, Gianno Giacobbi, Osvaldo Bot, Alfredo Soressi, James Bertucci, Alessandro Marenghi.
Except Bot, all fall into a current figurative tried experiences now expressionistic now geometrically.
Among them, Luciano Richetti is considered a painter of national stature place by some critics at the height of a Saetti, a Carpi, a Funi, was somehow blocked by a provincial laziness and aversion to address risks and adventures out from Piacenza.
Modern figurative, solid, bright, distinguished because it has a great technical ability, a dense color and vibrant, with an innate talent for composition.
Remained insensitive to the futurism of Marinetti (instead followed by Bot) and received the message instead of the twentieth-century movement that reacted, in the years 1930-40, the last decandentismo the nineteenth century painting.
Just the '30s and' 40s saw the happiest moment longer valid and the painter who, in 1936, to the surprise of all the Italian art world, gained the victory in the Prize of Cremona beating off the names of the most important of the moment.
His descent began after 1960 although until 1967, the year of his death, he continued to work with great passion.
© infotour p. iva 01474490339