Routes in Bettola - taken from Bell'Italia 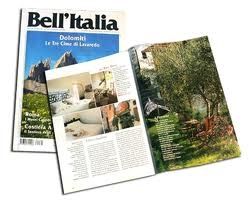 In Italy there are villages that no longer appear on the maps because there is no road never arrived.
They are hidden in the folds of the mountains.
Have endured for years the exodus of their inhabitants.
Overseeing stones, Timber, on needle, on the memories and the memories.
Their beauty has the taste of melancholy.
Are the villages 'lost' in Italy that can be reached only with the strength of good walker but also with the skill the investigator.

There are countries named sweet, almost musical, like Rigolo.
It is sweet is the place where it is, on the lower slope of a mountain covered with woods and then opened by a large lawn.
The houses are close to each other, some standing, others torn down by time. The church, with its bell tower, is little clear as to stand out from the crowd of homes.
These have all the roof 'ass' slate, gray by time or greenish moss. High and disproportionate chimneys suggest large fireplaces where the old patriarchal families were gathered around the fire.
The whole village seems modeled by a single hand, so the houses are similar, they are so close and connected lanes.
A Rigolo, in winter, lives one family, others are in the summer but just to enjoy the haunting beauty of the place. It is people who come from Pavese (here in Piacenza Nure) because in 1450 Rigolo was the summer residence of the Bishops of Pavia, and so was born a small colony.
Until the beginning of the last century, then they all left, attracted by the lights of the city. Many went back to wherever they came their ancestors, in Pavia and environs.

1. To achieve Rigolo walk, as we promised, you can start with Costa, a village luckier than Rigolo because we receive a paved road and a bus. Its location is beautiful, on a ridge of meadows with houses that look two valleys.
Da Costa, following the trail white / red 029, it comes down to the ford of the Rio Spigone.
The cart track soon becomes trail between slopes landslides that leave uncovered the layers of marl and limestone, ancient seabed.
The other side of the valley is more stable and compact, covered by the branches of the chestnut trees, the oaks, hornbeams. After fording the river, in the opposite slope, it reaches Rigolo the Church, along the old mule track (or with the longest dirt road).
The specification is used to distinguish it from Rigolo Scoglio, nearby, recognizable from the high tower of medieval flavor.
You can linger among the old houses, relax on the lawn, drink cool fountain, or be a tribute to the binnacle.
Eventually meets always someone there by chance or by necessity (a vegetable garden, a bit 'of wood, a very slow restructuring ...) and you can talk to.?

2. You can stop in Rigolo and retrace their steps, or, in the season with the vegetation at rest, past the small cemetery, take a mule track that gradually turns into driveway.
Go up the valley of the River of boats up to Predarbora (taken without trail!),
A corner of wilderness where it is normal to see the signs and, perhaps, the outline of some wild boar.

3. Predarbora is another abandoned village with a church, dated 1760. It passes over the houses going up the coast along a smooth dirt road, which then flows into the provincial halls Groppallo.

4. Without remain on the asphalt you follow another trail in the woods around a valley and almost touches the summit of Monte Penna.
Here you meet the 043 that, with repeated turns, pointing downhill to Costa, the village from which you started.

Circular walking route in a convalle of Nure Apennines Piacentino.

Point of origin and destination: Costa di Groppo Ducale, part of Bettola. Located 11 km from the capital, is reached by deviating from the road to Morfasso. A Bettola, in turn, you get to 34 km from Piacenza, following the path of Nure (ex-SS654)

Walking time: 4 hours 30 minutes (2 hours and 30 minutes if it limits us to Rigolo). Itinerary partly reported (029 da Costa in Rigolo Church, 046 from M.Penna Costa), recommended for experienced hikers. Impassable after heavy rains and during the days of hunting.

Period: until May, after September.

LOOK OUT! THE PATH MAY BE infrascato if path in summer.