Routes in Bettola - with Roberto Rossi

Ebbio and towards the Passo del Cerro 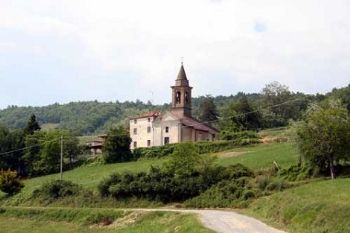 The territory of Bettola is among the largest in the province of Piacenza and is amongst the largest municipalities of the entire peninsula.
In another tab we went to know part of this territory, which extends to the right side of the river Nure, along a path that leads in loc. Rigolo, to discover the natural beauty and interesting reality accommodation and catering, as the Farmhouse Ca Sonnino led by family Callegari, structure, part of the circuit "Farms of excellence of the province of Piacenza."

How then are back in the company of Peter Mazzari, former commissioner of the town of Bettola and my personal guide. The route will take us through landscapes that develop on the left side of the Nure.
From the town center we therefore Ebbio direction, with a first short stretch that runs along the river and climbing as soon as we leave behind us.
First steps over a small bridge under which flows the river Ozza and is immediately obvious that it is a journey off the beaten tourist track or Sunday and was able to maintain aspects of their strong in its rural villages, of harshness in its environment.
Even the road and its smoothness are typical areas of little jokes, enjoyable and valuable for exactly this.
These are places that are lived and dealt with the taste to come into contact with the natural size almost extreme, with the availability and the predisposition to accept what is proposed as before his eyes.
It 'so you have to live these territories. And that's how we should live anywhere, enjoying the advantages as well as any inconvenience.

Whilst I realize these considerations, sharing them with Peter, the road makes the car jump and, nell'incedere, we give in to the insistence of this asphalt that none of it to become softer, more "friendly".
Here we come, after a few minutes in the shelter of a small deviation of gravel road indicating "Al Chamali", a farmhouse "sui generis", as known and popular, not because of features related to its food or hospitality, but as the center where they are practiced meditation techniques and relaxation, for its own well-being.

Just beyond, overcome some curves, another indication signals instead a farm classic, quality such as to fall within the circuit of the Farms of excellence of the province of Piacenza: The Farm. Located in loc. Caslasca Middle and we go to visit it.
We find that Laura with her family runs the business. Invites us to sit down to give us a good glass of red wine, genuine is genuine as the people here.
The structure, tells Laura, located exactly at where once stood a tower, ancient control location, to defend the territory from enemy attacks. And in this case it was more family Camia, long struggling with the powerful family Nicelli, feudal lords of this land.
Ancient tower resists unfortunately still very little, little remains represented by a piece of the wall adjacent to the farm.
While on the other side, which stands in a panoramic view particularly impressive, stands the castle of Cianeto, an ancient fortress that held also functions to defend the territory.

Laura greeted continue our journey, leaving behind The Farm, no doubt an interesting tourist reality to write down on our travel diary.
We arrive in a few minutes, at a junction indicating locations Torria continuing straight, while the deviation to the right indicates Ebbio, so we turn and continue.
Extensive fields that stretch as far as the eye accompany us to the goal. Here the hills stretch soft, while, on the left side, stands out against the Montosero, whose top dominates impressive.
Another few minutes and here we are at Ebbio.
A tiny village with a few houses inhabited and a few other popular on weekends or during holiday periods.
Places where it is easy to find serenity, places to rest. But also ideal places for fans of walking, hiking, thanks to the many well-marked trails CAI, as one marked by signpost 001 leading from Passo del Cerro at Monte Castellano, to the territory of Pontedell'Olio, intersecting with the path 171 that drops to Perino.

To stop the car transiting near a house that seems inhabited, in front of which is stationed peacefully a cat that seems to show little desire to depart to let us pass.
We slow down almost to arrest, when he decides, with air a little annoyed, to step aside, leaving the road.
Park your car and walk towards the center of the village where the ancient tower is shown still in excellent condition. In other conditions versa instead the church, very abandoned. In a court, in the cool of a porch, an old lady blissfully enjoying the peace and tranquility of these places.
She ask information about the church. Said the church, titled in San Arenzano, contained, until shortly before, discrete objects of value that were to adorn the religious building, which went, the few residents, really proud.
Then - continued the old lady - vandalism and looting, they stripped of almost everything, making it in the current state. For this - concluded - I decided to close it ... "because you, that church I just shut myself, with my own hands."

We say goodbye and leave to spend a happy afternoon quiet. We get in the car and take the road, past Buca della Rocca, a very small group of houses with which we meet a lady, with a gait a little breathless, bent over his more than ninety years, gives us a few jokes that allows us to come aware that this small village is experienced by one family and that she has always lived them, not by them if they have ever gone.
We move to achieve a deviation that signals the Farm Gusai, at a glimpse very pleasant that opens onto the side Trebbia.
A little further on we see on our right, a rocky outcrop on which rest some remains, a few stones of an old religious building, witnessed by the presence of a cross in white marble that still stands on the top of the rock, in a precarious balance .
The structure seems to be treated in a former convent of which, unfortunately, it seems there is no historical record. Following the road is narrow and dark, closed laterally by two big walls.
Return bright opening again the lush hills surrounding this beautiful stretch of Nure.
And suddenly we see a flag waving high and proud crusade with four died of Sardinia, to report that it has come Gusai farm family, native of Nuoro.
I find this curious fusion of local food typical Piacenza and Sardinian culture, known to be highly sensitive to its tradition, to its origin.
After a nice chat with the family, you do not need to completely dissipate my doubts, leave the room and head to the main road that leads back to Bettola where, at the stop sign, next to the road we see a flock of sheep which the family Gusai certainly could not deprive yourself ...

We overcome altitude 750 meters of the Passo del Cerro and we take the detour that indicates Montosero, Leggio and Calenzano, this center of the beautiful Val Perino, known for the beautiful hike the falls.
A large yellow sign and obvious signals the GAEP, famous non competitive that starting right here and that through these mountains, comes to a close in Selva di Ferriere, after a distance of 33 kilometers.
Our journey comes to an end. At the junction Leggio - Calenzano we opt for the latter, passing the castle of Erbia and then return to the starting point.