Pontedell'Olio - Itineraries in the Nure (second before) 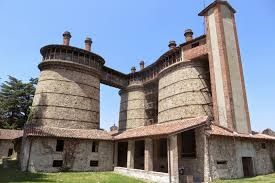 Routes Piacentini, an appointment that has accompanied the readers of quotodiani Piacenza, now proposed here, on the web, in this beautiful portal that presents the excellence of a territory to discover.
Let us therefore follow the path left in the half on the previous card, and we carry out a visit to this beautiful center of Nure: Pontedell'Olio.
We had visited in the previous board, the center of the country, going to find religious buildings and briefly recounting the history that has characterized this area.
Today we are in the company of Maria Grazia Dodici, municipal employee and good connoisseur of this area, which leads me to the discovery of a part of the territory surrounding the municipal center.
The route starts from the Municipal Palace, beautiful '800 building, where I meet with Maria Grazia.
The day is sunny, fresh air and pungent.
Enthusiasm is what catches me every time I get ready to discover places of our beautiful province.
Places that can be reached within minutes from Piacenza, who guard ideas and extraordinary historic, scenic, environmental.
Corners of our country little known, or rather, less known to Piacenza themselves, but instead are often attracts tourists coming from neighboring provinces, visitors are able to appreciate things in our house, paradoxically unknown to us.
And it is a consecrated "Italic defect", a national character trait the outside world, which leads to put up with 20 hours of flight for a week in the Caribbean or in Polynesia, perhaps without ever having seen Sicily or Sardinia, Tuscany or Puglia , or all the other wonders of our country.
But anyhow ... Let's go back to our itinerary Piacenza today and Maria Grazia we establish on paper which will be our path today.
Ready to go, the first stop is the industrial complex of the late nineteenth century the furnaces Cementirossi, which is located right next to the Municipal Palace.

Le Fornaci
Returned to prominence and reclaimed by the municipality, this old building is now an interesting tourist attraction for its historical and social significance attached to it.
The structure is made from the tower of the furnaces, on three floors, used for the production of lime, which stand tall and dominating.
Complete the construction of the deposit horses, warehouse and Villa Rossi.
There is talk of more than a century ago when they were inaugurated the first two lime kilns, fate to be precise in 1895, while for the third furnace will have to wait until 1923.
The entire complex was composed, for the truth, the other two who later, however, were demolished.
Here are told year history, inside these walls grew and developed an entire community.
The workers were working in shifts of six or eight hours a day to produce three fell.
To actuate the means of transport were initially animals, then came the trains "decoville", for the production of "lime in clods" which will last until 1958.
The operating system used was a continuous cycle and the technique adopted was that of so-called "top loading ".
The plant was equipped with a lift for efficient channeling of Nure calcareous stones, which were dropped slowly to be transformed by the fires, fueled by burning coal.
The lighting of fires, it is said, was the responsibility of a child holding a candle called "Sariola".
Construction of the first furnace is entrusted to Emilio Rossi and coincides with the advent of the tramway to Pontedell'Olio, in 1881.
The brother of Emilio, Giovanni Rossi is remembered as plant manager in just 16 years.
Other memories say that during World War II seems that the ovens functioned as a hiding place for the Germans sought.
Careful and meticulous restoration work has brought these tall towers, which represent a piece of industrial archeology, a tourist and cultural, with guided tours that can be requested by calling the City, owner of all the property, but also for art exhibitions and thematic exhibitions that range to be located within a structure certainly suggestive.

Old Railway Bridge
Partly damaged during the Second World War, with a bombing that 7 September '44 caused damage later repaired, the bridge is spread over an area of 400 meters. 1931, built of reinforced concrete, is one of the few Italian railway bridges which is characterized by a particular curvature of 300 meters.
Next to the bridge stands the Fontanazzo, public fountain with the cannulas and the tanks, a place that until the early decades of the twentieth century saw the women of the village gather to wash clothes.

Villa San Bono
Owned now the Curia of Piacenza, Villa San Bono is on two floors and dates back to the second half of the nineteenth century. Commissioned by the French Sabonet, it is a remarkable example of neoclassical with wrought iron entrance gate and two interior gardens.
Its rooms have hosted distinguished figures of the time, as Carolina Elizabeth of Brunswick, Queen of England.
It was the summer of 1819 that, because of the constant betrayal of her husband, took refuge here guest of Sabonet, where he found peace, dedicating himself to the embroidery and the game of chess. To visit you must contact the Curia of Piacenza.