Ponte dell'Olio - Itineraries in the Nure (Part One) 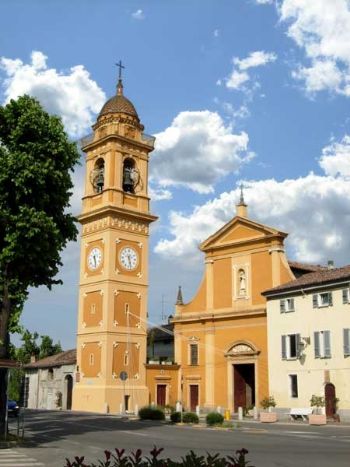 Roots pinned year one thousand and home to noble families in the Middle Ages.
We Ponte dell'Olio, village of Val Nure.
His name is already outlined in documents dating back to the ninth century, while in 1100 there was talk of the path of the pilgrims from northern Europe and heading for Spain, crossing the Nure and transiting through this small village, then called Ponte Albarola.
His features have ancient legendary: there stood only a small place of worship dedicated to Saint James and an adjoining hospital run by the monks, who offered care and refreshment to travelers.
This whole area was sparsely populated and its inhabitants were invested with the task of maintaining such so-called "pedancole", the footbridges over the river Nure, for whom crossing the foreigners were required to pay a toll.

Its current name refers instead to 1200, when the village was famous for being the destination of oil traders from Liguria. They came here caravans of mules with their loads of olive oil, which was stowed in special warehouses. The intensification of this activity resulted in a renaming of places, from Ponte Albarola Pontedell'Olio to today.
Later, in medieval times, the whole area was well known for the nearby Castle of Riva, in principle belonging to the noble lineage of Anguissola, later passed to the Farnese family in the middle of the fourteenth century.
The famous bridge dates back three centuries later when, for the intensification of trade, it was necessary to ensure completion of a stone structure that served to pass.
The whole history of the village is closely interwoven with the history of the Nure, which is Ponte dell'Olio main witness.

To visit to Ponte dell'Olio

Inside the village, are noteworthy two places of worship: the first is the parish church of San Giacomo Maggiore, built in 1272.
This date is etched in stone small plaque placed on the wall of the house of the catechism, the facade facing towards the churchyard.
And 'This is the first church that meets crossed the bridge for those coming from Piacenza.
Its front, preceded by a small churchyard cobblestone, is low and follows the lines of the three inner aisles.
On it there are still traces of the two paintings executed in 1500 and depicting St. James and St. Rocco. The nearby bell tower is impressive compared to the church and is built much more recently, as it dates back to 1707 and replaces a previous tower, torn down and replaced because unsafe.
The interior, which wraps in its warm colors, has three aisles; just crossed the threshold, in the right aisle, you will come across in the confessional, which has its counterpart in the left aisle, both built in the late eighteenth century by local craftsmen.
Continuing down the aisle, you can admire three chapels, dedicated respectively to San Corrado Confalonieri, St. Joseph and St. Anthony Abbot and Madonna.
In the left aisle corresponding chapels are dedicated to San Pellegrino, St. Anthony of Padua and the last is instead called "Our Lady of Grace", the painted wooden statue, depicting the Virgin sitting with the child placed in the niche above the framework.
This small statue is one of the most valuable pieces in the church. It was already mentioned in 1500 on the occasion of a pastoral visit, but it is probably the oldest and was therefore already in the church long before.
Moving in the nave you can see, on the left, the beautiful wooden pulpit, merged to a pillar and, facing the altar, built in 1780 in sculpted wood and silver.
Above the altar, the canopy roof, also dating back to the eighteenth century and, in the sacristy, a large piece of furniture in walnut. Finally, it is worth remembering the Chapel of the Rosary, in the bottom of the right aisle, to the presence of another statue of the Madonna and Child in her arms, existing here at the end of the sixteenth century.
Another highlight is the historical fact that refers to what lies beneath the floor of the church and said that in the eighteenth century the places used for the burial were eight: one reserved for priests in the Chapel of the Rosary, the other in the nave dedicated to families prestigious and for everyone else remained the aisles.
At the end of the eighteenth century a reorganization that reduced the number to four: more than usual for the priests, they were three, one for children, one for men and one for women.

The second place of worship worthy of note is the Church of San Rocco. The facade closer, set on three levels, it was rebuilt in the early nineteenth century.
Beautifully crafted is the wooden choir, built by the hand of the artisan local Lorenzo Barbieri at the end of 1700.
The pride of the village, at least for the level of notoriety, is the Castle of Riva, a small fraction of which is about 2 km from the center of Ponte dell'Olio.
The place name is already in 1199 when the castle was built in 1277. From the family Anguissola was sold, in 1567, the Duke Ottavio Farnese, who made his home resort.
Built entirely of stones Nure, has a base in the shape of an isosceles triangle, bordered by the river and is partially surrounded by a moat.
The keep is square and topped with lace dovetail; the crenellated walls are topped by battlements and the entrance is protected by a drawbridge.

The municipality of Ponte dell'Olio embodies many other places of scenic and tourist, as Castione, Montesanto and Carmarthen.
The whole area is also affected by intense and qualified farm.
Fact there are numerous places offering accommodation and catering offering mainly local products of own production.