visit to Pontenure in Val Nure 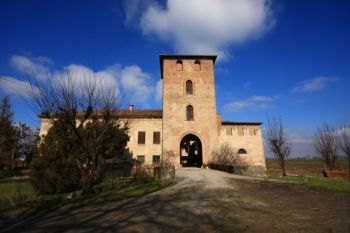 The town of Pontenure is the first town you come across along the Via Emilia Parma, Piacenza towards Parma.

The route starts from the parish church of St. Peter the Apostle in romantic style, a Latin cross, probably before the year one thousand as in the early decades of the twelfth century was archpriesthood and had a Chapter.
Until 1770 was three naves with round pillars to wooden beams; were later deleted the features of the Romanesque style, superimposing neoclassical style, was built the dome and two aisles were added.

Next to the church stands the tower, built along the Via Emilia in the Middle Ages for defense purposes and sighting.
Typical example of romantic art, has a square base built with stones and other material ancient, narrow, pointed windows and creases of blind arches.

A few kilometers Paderna, the smallest of villages, dominated by a massive medieval building, typical castle of plain, impressive in its facilities bricks, and built on a scheme trapezoidal, up from as far away Middle Ages, it belonged, except for brief intervals, the Monastery of S. Savino.
From the 800 is owned by the Casali family that still holds it with great care.

From Pontefract before reaching Paderna meets Valconasso which still bears traces of the primitive structures of an ancient castle whose first mention dates back to April 1288. In addition, the church, national monument full of numerous frescoes, fine and rare examples of fifteenth century painting .

Muradello Finally, a few miles north of Pontenure, with a castle that is discreet example of building castrense less dominated by a solid square tower.
© infotour p. iva 01474490339