Isabella Ferrari, is an actress 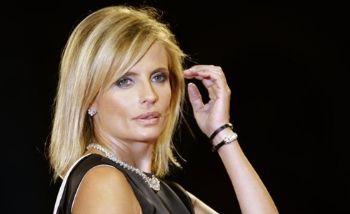 Isabella Ferrari, pseudonym Isabella Fogliazza (Bridge Oil, March 31, 1964), is a film actress and theater actress Italian.
Born in the province of Piacenza, spent his childhood in the village of family and Gropparello.
In 1974 the family moved to Piacenza.
At 15, he won the contest Miss Teen, and prize gets a recording contract with WEA Italian that does affect a 45 rpm. Soon, however, will take another route.
In 1980 he made his debut on television with a small part in the program Under the stars of Gianni Boncompagni. During transmission was noticed by director Carlo Vanzinas, and in 1981 landed a role as in the Wild Taste of the sea, his first film. At age 18 he moved to Rome and finally takes an acting career, alternating film appearances in theater. In 1988 she was chosen by Marco Tullio Giordana for Appointment in Liverpool, in which she plays a girl desperate ready to kill the hooligan who killed his father. In 1989 he starred in Willy Signori and I come from afar; while in 1994 it was the turn of Story of a Love violated by Giacomo Battiato.

In 1995, the Venice Film Festival in Venice, won the Coppa Volpi for Best Supporting Actress for her performance in the novel of a young poor Ettore Scola with Alberto Sordi.
In 2000 and in 2001 played the part of the Commissioner Joan Scalise in the first two television series Police (Mediaset), directed the first by Renato De Maria (who will become her husband) and the second by Antonello Grimaldi. In 2005, the protagonist of the movie Love me Renato De Maria and bye love, hello Michele Soavi.

Among the other Italian films in which he starred include: Shining Marco Turkish; Holy Tongue Carlo Mazzacurati; The seed of discord Pappi Corsicato; Saturn in Opposition and A Perfect Day by Ferzan Ozpetek; Quiet Chaos by Antonello Grimaldi (with Nanni Moretti); Two batches of Enzo Monteleone. He also took part in Woody Allen's To Rome with Love, with a small cameo. In 2010, again on television in fiction Channel 5 in white. In 2009 she starred in TV History of Laura (Rai 1) Andrea Cardinals, which is broadcast in 2011.

He participated in the International Film Festival of Rome 2012 with And they call summer, directed by Paolo Franchi winning the prize Silver Marc'Aurelio for best actress. In 2013, again directed by Paolo Sorrentino in The great beauty.
© infotour p. iva 01474490339