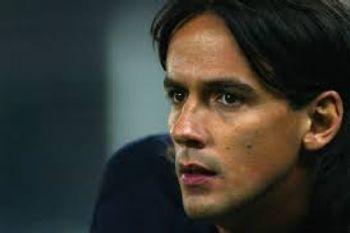 Simone Inzaghi, younger brother of Pippo Inzaghi (Piacenza, April 5, 1976) is a former Italian footballer in the striker role.
In summer 1998 back to Piacenza, who offers him a chance in Serie A which makes the terminal's offensive game.
Inzaghi goes straight into the goal at the first day of the season against Lazio.
At the end of the tournament its goals will be 15 (seventh scorer of the league) and Piacenza succeed last day to obtain salvation, and in the summer of 1999 he moved to Lazio LazioAlla Inzaghi finds himself with a team with champions such as Alessandro Nesta, Juan Sebastian Veron, Pavel Nedved, Roberto Mancini and Marcelo Salas, managing to carve out an important place in the team.
May 22, 2010 announces the termination, one year in advance of his contract with Lazio, while remaining in the blue-white, this time as a coach of the Students Regional, with which at the end of the season will win the Cup Lazio.
The following season he was promoted on the bench of the National Students. In the month of January 2014 was promoted to head of Spring Training, replacing Alberto Bollini
© infotour p. iva 01474490339