Pier Luigi Bersani is a political 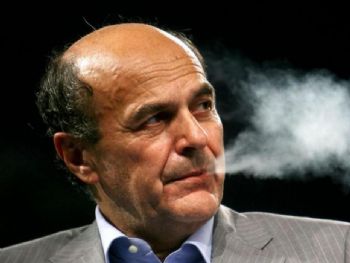 Pier Luigi Bersani (Bettola, September 29, 1951). President of the Emilia-Romagna region between 1993 and 1996, he was Minister of Industry and Commerce in the Prodi and D'Alema I I, Minister of Transport and Navigation in governments II D'Alema and Amato II, Minister Economic Development in the second Prodi government.

He was the leader of the ruling center-left Italy. Common Good in the general election of 2013 after his victory in the primaries of 2012.
Pier Luigi Bersani was born into a family of artisans. His father Joseph was mechanic and gas station.

In an interview on Porta a Porta, the parish priest of his native country remembers as a child and as a teenager Bersani place in church service altar boy.
Also remember a curious incident of childhood Bersani which ended in local newspapers: to protest against some choices of the pastor on the destination of the offers made by the faithful, the small Pier Luigi organized a strike of altar boys.
In the same interview, the mother of Bersani recalls how the family, Catholic and Democrat, was initially shocked by the choice of the son of founding a section of the working Vanguard in 1970 and then in military PCI and to convince him to change his mind his mother called home his brother, a missionary priest, so to speak to his son.

In 1966, just fifteen, participates with the many "mud angels" to save the art of Florence after the flood of November 4, 1966.

He graduated with honors in philosophy at the University of Bologna in 1974, with a thesis on the history of Christianity, centered on the figure of Pope Gregory the Great. After a degree in philosophy, carries the military service, as a private, in Macon. He married in 1980 with compatriot Daniela Ferrari, pharmacist, with whom he had two daughters (Elisa and Margaret).

After a brief stint as a teacher, he has dedicated himself completely to the administrative and political.
© infotour p. iva 01474490339