Franco Bagutti is a musician 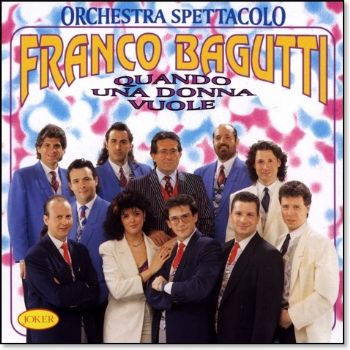 Franco Bagutti (Piacenza, April 6, 1943) is an Italian musician. After studying at the Conservatory of Piacenza in piano and bass, gives concerts abroad with the master snored, his teacher and first bass of the Teatro alla Scala.
In the late '60s enters the complex led by master Vitali, starts some collaborations in classical orchestras and lightweight, which led him for a few years around Europe and also in the East.
Back in Italy, he began working with the orchestra of the saxophonist Leo Bruni and with that of the master Pippo Caruso (future "musical arm" of Pippo Baudo), until founding in the early 70s his first band, "The Bagu "
From the beginning, Franco Bagutti has clear ideas about gender to be taken: wants to be his dance orchestra but also by listening, able to capture all types of public entertainment to 360 degrees.
It is 1972 when it was officially founded the Orchestra Bagutti in Piacenza.
Are not easy times for orchestra Emilian who wants to undermine the "primacy of Romagna" in the smooth of those years; but over time this musical training is able to establish itself in its own genre.
In 1976 they released their first album, "I remember my house." The hit song that gives title to the disc marks the beginning of collaboration with Maestro Franco Umberto Lamberti, author of many pieces of the orchestra
© infotour p. iva 01474490339