Edoardo Amaldi, was a physicist 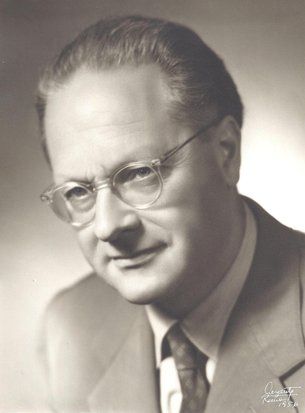 Edoardo Amaldi (Carpaneto Piacentino, September 5, 1908 - Rome, December 5, 1989) was an Italian physicist active in the field of nuclear physics.
Son of the mathematician Hugh and Luisa Basini, married in 1933 Ginestra Giovene.
Edward was part of the Boys of Via Panisperna, the study group, led by Enrico Fermi, he obtained fundamental results in the physics of the nucleus, crowned in 1938 from the allocation of the Nobel Prize to Fermi.

In particle physics, gave fundamental contributions to the determination of the characteristics of the constituents of cosmic radiation and the study of subatomic elements of matter, promoting the creation of the first particle accelerators in Italy after World War II (electron synchrotron Frascati).

In addition to nuclear and particle physics, Amaldi brought advanced studies of magnetic phenomena, elaborating the theory of magnetic monopoles and gravitational waves.

Personally contributed to the creation of the National Institute of Nuclear Physics (INFN), the European Center for Nuclear Research (CERN) in Geneva and the European Space Agency (ESA). He was secretary general of CERN in the years 1952-1954, the INFN President and President of the National Academy of the Lincei.

He has served for over 40 years the chair of experimental physics at the Sapienza University of Rome.

For his contributions in this discipline is considered one of the outstanding figures of Italian physics in the second half of the twentieth century.
© infotour p. iva 01474490339