Marco Bellocchio is a director and screenwriter. 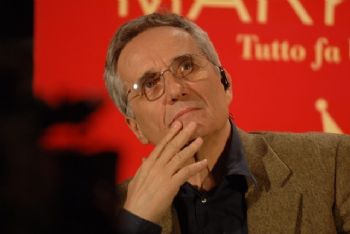 Marco Bellocchio (Bobbio, November 9, 1939) is a film director and screenwriter. From an early age to the Salesian schools shows some interest in the world of cinema and its irreverence towards the canons clerical him to be considered a rebel. In 1959 he attended the Experimental Cinema Centre in Rome, and - under the guidance of Andrea Camilleri - in 1962 acquired a diploma in directing, and continue his studies in London on cinema.
Back in Italy working on his first feature film: a Bobbio, his birthplace, in the province of Piacenza, at age 26, directs Fists in the Pocket (1965), selected at the Locarno Film Festival and winner of the Vela d 'silver in 1965, which already known her unconventionality, as well as in subsequent China is near, and the people of Calabria has reared its head.

These films are an expression of the values of a revolt lived, played and proposal: the revolt sessantottino against dominant institutions that control and repress people through a series of ethical values that characterize the entire bourgeois society. In these Bellocchio film lays bare the entire bourgeois society revealing all the contradictions and hypocrisies.
In 1977 runs a version of the play by Anton Chekhov's The Seagull. In 1978 knows the psychiatrist Massimo Fagioli, which began a long and complex collaboration: Beans will participate actively in the creation of three films: Devil in the Flesh, Conviction, The Butterfly's Dream.
After Harmonica (1979) and Holiday in Val Trebbia (1980) directs Marcello Mastroianni in Henry IV (1984), adapted from a play by Luigi Pirandello, and then Devil in the Flesh (1986) based on the book by Raymond Radiguet and Vision the Sabbath (1987). In 1991 he won the Silver Bear Grand Jury Prize at the Berlin Festival with The condemnation. In 1999 returns to adapt Luigi Pirandello on the big screen with The Nanny.

In 2002 he directed Sergio Castellitto The Religion Hour, which won the Silver Ribbon. The following year (2003) evokes the imprisonment of Aldo Moro in Good Morning, Night, with Maya Sansa and Roberto Herlitzka as protagonists. In 2006 directs again Castellitto The Wedding.

In 2006 he is a candidate in the general election for the Chamber of Deputies, in the list of the Rose in the Fist consists of radicals and socialists, moving away from its historical communist positions. In subsequent years, has repeatedly expressed his closeness to the radicals.

In 2009 he released Winning. Tells the tormented life of Ida Ida (Giovanna Mezzogiorno), lover of Benito Mussolini (Filippo Timi) and mother of his son Benito Albino (always Filippo Timi), deemed mentally ill by his repeated but unsuccessful attempts to see recognized the paternity of son by the Duce. The film won the Golden Efebo and the David di Donatello for Best Director.
On 4 and 5 September 2010 directing live TV opera Rigoletto in Mantua, starring Plácido Domingo, produced by RAI and broadcast around the world in 148 countries.


The 68th Venice Film Festival in Venice received from the hands of Bernardo Bertolucci Golden Lion for Lifetime Achievement.

Following announces its intention to make a film inspired by the story of Eluana and his father.
Shooting begins in January 2012 in Cividale del Friuli. The film was premiered at the Venice Film Festival in 2012, with the title Sleeping Beauty.
The film deals with the issue of euthanasia, and the difficulty of having a legislation on end of life in a country, Italy, which hosts within its boundaries the Vatican City, the world center of the Catholic Church. Following the decision of the jury of the Venice Film Festival, which has ruled the film from the Golden Lion (awarded to South Korean director Kim Ki-duk), Bellocchio has expressed strong criticism against President Michael Mann and the work of the entire jury , accusing penalize and not understand Italian films.