is among the most coveted stages of Piacenza area 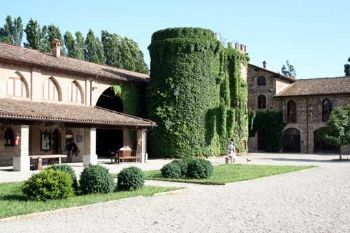 Dictionaries recite the word art:
human activity based on the study on the technique and experience. From this arise cultural products that are the subject of appreciation and Thumbs. Major arts are architecture, painting and sculpture. Minor arts are ceramics, the art of wooden furniture with carving and inlay, the artistic manufacture of iron.

Art means then creating beautiful things that resist over time; hence Graziano Visconti Art City, a high recognition of the Emilia Romagna granted to a cultural and tourist truer than ever even if the visitor is like a fairy tale.
No coincidence that this place, which country unreal in reality constitutes the strongest tourist attraction in the province.

In this village you work wood, iron and ceramics according to the teachings of the culture and education is not written, but handed down from father to son. The love for the craft creative here is still sovereign, while the village is protected from degradation of the time, with style and passion by the current owners grandchildren of Duke Giuseppe Visconti.

The fourteenth-century castle is the starting point, the origin, the laboratory of the invention, the intervention of the Duke Giuseppe; an intervention conducted in person, with enthusiasm, with transportation to the medieval art and with considerable entrepreneurial skills.

The invention of Graziano Visconti takes place over a period of time ranging from the early '900 the death of Giuseppe Visconti in 1941.
In any intervention Count uses its imagination, exuberant and refined, up to create a work with great balance and harmony.
It is an inevitable stop on a visit to the territory of Piacenza, although everything that revolves around the eyes has nothing really original and ancient, but the magic that is capable of giving this small village is extraordinary.

Even the timing of events that animate these cobbled streets are the ones who deserve the trip, from historical parade, an event that in 2015 will reach its 38th edition. Connected to it in the Tournament Horse with people in lavish costumes evoking medieval and renaissance with jugglers, acrobats, soldiers and knights, ancient times, in a celebration of great charm.
© infotour p. iva 01474490339