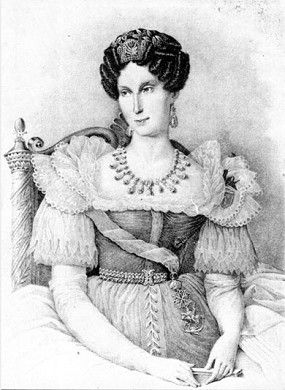 Historians have spilled rivers of ink to deepen if Maria Luigia was a good wife, because Napoleon had not yet been finally defeated, when Marie Louise decided to go on vacation with the Austrian general Neipperg.
Other rivers were paid to deepen even if Maria Luigia was a good mother.
Suffice it to say that to stay with Neipperg, had wanted to move to Parma because the court of Vienna that his report would encounter obstacles; and so abandoned the child in Austria.
Neipperg just became a widower, Marie Louise married him, making official a relationship that lasted for years.
Neipperg died in 1829 after only two years, the conditions of the duchy were so changed that in 1831 in Parma burst of popular movements so violent that the Duchess and the court had to run away in Piacenza, where there was a strong Austrian garrison.
In the summer the Duchess could return to Parma and continue his mild government until his death (1846).
His last words were:
I hope I do not forget the Parmesan because I really loved them, and I have caused more and do them good.
In fact the work of Marie Louise is still visible in Parma, a city that Sapora of real charm.
© infotour p. iva 01474490339