Pope and the Duke of Parma and Piacenza 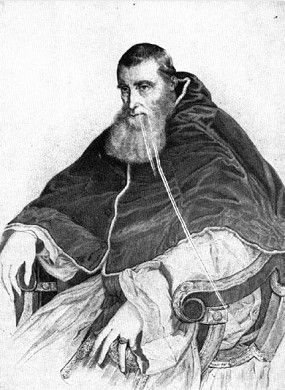 A Clement VII was succeeded in 1534 Cardinal Alessandro Farnese, who took the name of Paul III.
The new pope was full of affection for his son Pier Luigi and he thought for a great future, especially after the wedding of Ottavio Farnese, son of Pier Luigi, the daughter of Emperor Charles V, Margherita.
Despite the rampant acts of Pier Luigi, Paul III wanted to create a great descent for his family and asked several times to the emperor the investiture of Milan or Pier Luigi or Ottavio.
Given all attempts, Paul III decided to give Parma and Piacenza, who belonged to St. Peter and that is the Church, his son Pier Luigi and create Duke.
In 1545 the duchy had so official start of Piacenza and Parma, Piacenza and passed to the rank of capital, since it was one of the largest and most important in northern Italy.
Pier Luigi took formal possession of the Duchy, but on the day of the coronation was struck by an attack of pellagra, so the induction ceremony took place in a bedroom of the Citadel, now ducal palace. Paul III was born in 1468.
Before forty years, not having holy orders, had given birth to at least four children, including in fact Pier Luigi. Once elected Pope Paul III tried to curb the effects of the Protestant Reformation and the Council of Trent, which laid the foundation of the church "modern".
© infotour p. iva 01474490339